Alexis Tsipras is headed to Berlin in his first official visit as prime minister. Both he and Chancellor Angela Merkel have insisted the visit is about repairing damaged ties, not debt negotations. 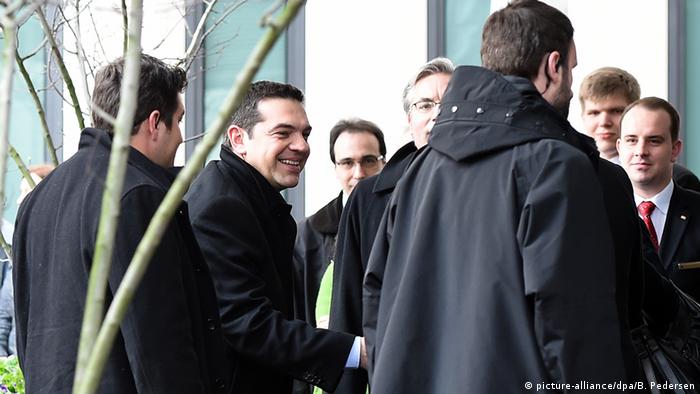 The leaders of Greece and Germany meet Monday, hoping to calm the acrimonious relationship that has developed in recent weeks over Greek debt reform and repayment. Chancellor Angela Merkel will welcome Prime Minister Alexis Tsipras at the chancellery building in central Berlin in the afternoon before holding talks and a working dinner.

The meeting comes as Greece teeters on the brink of insolvency. According to the Sunday edition of Germany's prestigious daily Frankfurter Allgemeine Zeitung, Greece only has until April 8 to remain liquid if the situation stays as it is.

Both Merkel and Tsipras said negotiations over Greek debt restructuring will not be on the table, but rather a re-establishment of trust after weeks of going back and forth.

Merkel also downplayed chances of Tsipras producing promised reform measures when they meet, saying "it is not the place for any lists with proposed reforms to be submitted" and they must go to Greece's international debt inspectors, not to Germany.

Her spokesman Steffen Seibert added a caveat, however, ahead of the meeting on Monday.

"Of course it's interesting for the chancellor to hear from the Greek prime minister's mouth what his ideas are," Seibert told the press.

German Foreign Minister Frank-Walter Steinmeier said both countries need to focus on their common goal of keeping Greece in the 19-member eurozone.

"We must not allow the doubtlessly weighty and difficult issues that we in Europe need to resolve together to erode the strong foundation of German-Greek relations," Steinmeier said late Sunday following a meeting with his Greek counterpart Nikos Kotzias.

The souring relationship between the two countries has seen not only a war of words, but other unusual moves such as a Greek demand for reparations from Germany's World War II occupation of the country.

There was also the incident in which German satirist Günter Jauch surprised Greek Finance Minister Yanis Varoufakis with a video made prior to his government days in which the economist appeared to show his middle finger to Germany in response for the painful austerity measures imposed by his country's creditors.

Underlining the stakes in the protracted crisis, Tsipras cautioned Merkel in a letter that Athens will not be able to continue payments of its current debt with help from the EU, emphasizing that no government would be able to do so under the current conditions.

"Given that Greece has no access to money markets, and also in view of the 'spikes' in our debt repayment obligations during the spring and summer ... it ought to be clear that the ECB's special restrictions when combined with disbursement delays would make it impossible for any government to service its debt," Tsipras wrote, referring to the European Central Bank, one of his country's main creditors.

Greek government spokesman Gabriel Sakellaridis confirmed the veracity of the letter obtained by the Financial Times, which was originally written on March 15. Sakellaridis said the comments about the impossibility of Greece fulfilling its debt commitments under current conditions was "not a threat, it is reality."