Greek minister: ′We′re half-hearted′ on some austerity measures | Europe| News and current affairs from around the continent | DW | 11.05.2016

Five years, three bailouts, two governments and countless emergency meetings later, neither the country's government nor its people - 25 percent of whom are unemployed in an economy that shrunk by a quarter in five years - fully back the latest austerity deal that was agreed on Monday.

In fact, there have been major demonstrations against the €5.4 billion worth of measures, which will increase social security and pension contributions and raise taxes. Since the crisis broke out in 2010, similar deals have not borne fruit. So why would anything be different this time? In order to make a repayment due in July and receive the first tranche of funds from the EU bailout program, Greece desperately needed additional funds. The bailout money largely goes towards paying off Greece's debt - and therefore has little effect on the economy.

'Our agreement is a compromise'

In an exclusive interview with DW, Nikos Pappas, Greek Minister of State, has now admitted the Tspiras government was "half-hearted in measures that we believe that could be implemented in a different way". "Our agreement is a compromise. The agreement itself has got the elements that our partners asked us to implement, and our wishes. So, the program is not totally ours, it is a compromise," Pappas added when Michel Friedman confronted him with a statement by the Munich based Ifo Institute that said Athens were dragging its feet on economic reforms. 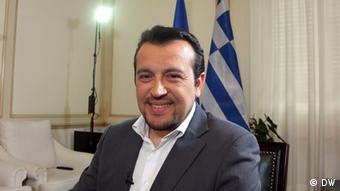 Syriza - the far-left party that took government in 2015 - failed to deliver on its promises, posing a problem to Greek citizens, its creditors and EU diplomats in Brussels. Klaus Regling, head of the Eurozone's rescue fund EFSF said that although Greece has made some progress with its reforms, the overall "implementation capacity" has been slow - and in fact the "weakest in the European Union".

'Is your tax collection office on a permanent vacation?'

When Friedman asked whether the constant emergency meetings don't have a certain resemblance to a bad drama, with Athens simply repeating the same old lines, Pappas said: "We have never denied they were internal problems in the Greek state, the Greek economy and the Greek society, never. But these problems were matched with a totally wrong approach that resulted in such a severe recession." Pappas also refused to take responsibility for the 17 billion euros that escape state coffers every year, so that the Greek shadow economy represents up to a quarter of the country's GNP. Pappas called this figure "another extreme expression that does not reflect reality".

But the economy isn't the only thing keeping Tsipras' government up at night: Greece and its islands have become the epicentre of Europe's collective failure to address the refugee crisis. Since the EU and Turkey sealed a deal to remove refugees from Europe, the Athens government has been overwhelmed with the 50,000 refugees stranded in Greece. Just meeting their basic needs poses a major challenge.

On Wednesday, several hundred refugees launched a hunger strike to protest against the living conditions in a camp near Athens. Reports say conditions there are overcrowded and unhygienic. 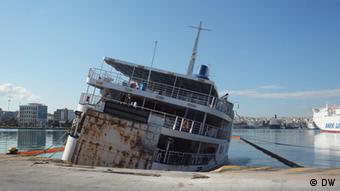 A metaphor for Greece?

Following the closure of the Western Balkans route, Amnesty International in April concluded the situation has worsened since 2013: "With all eyes focused on the implementation of the recently agreed EU-Turkey deal, the plight of more than 46,000 refugees and migrants stuck in squalid conditions across mainland Greece, is in danger of being forgotten."

Another report by Human Rights Watch found that "Greek authorities in coordination with the European Union, are automatically detaining all asylum seekers and migrants who arrive on the islands of Lesbos and Chios in deplorable conditions."

Pappas denied the allegations: "I had the chance to visit Lesbos myself a few days ago and this is not the case." However Human Rights Watch has told DW that the allegations regarding deployable conditions and arbitrary automatic detention still stand.

"On our visit to Moria (Lesbos) on May 9 and 10 we found thousands of people being kept in deplorable appalling conditions. Due to overcrowding and the lack of shelter (containers, beds etc.) people detained have to sleep in tents in the open which often are not even provided by the state. This is a detention center and the state has an obligation to provide adequate conditions to everyone," Eva Cosse of HRW said.

Greece: 'Worse than Game of Thrones'

Twitter legend "The Greek Analyst" is back for his take on the latest installment of the Greek debt crisis, drama included. (10.05.2016)

Greece is warning Britain's exit from the EU could torpedo an already shaky migration deal with Turkey and upend efforts to contain massive migrant inflows to the continent. Anthee Carassava reports from Athens. (09.05.2016)