Greek ferry workers and journalists have begun a strike to protest at a new austerity package to be put to a parliamentary vote this week. Islands without an airport will be effectively cut off from the mainland. 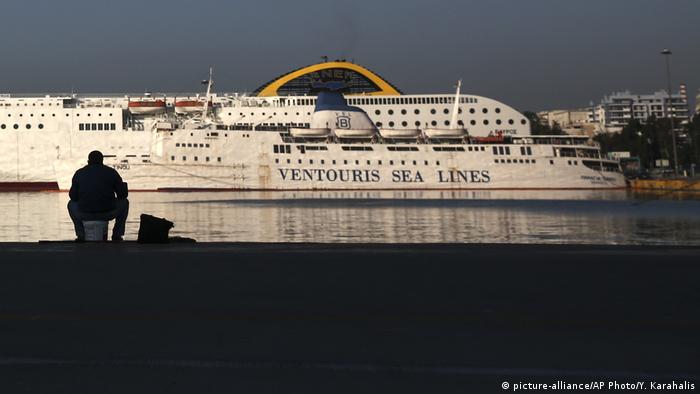 Greece is facing a day-long information blackout, while many tourist islands will be virtually unreachable, as journalists and ferry workers began strikes on Tuesday to protest at another package of austerity measures ahead of a parliament vote on Thursday.

Journalists are on a 24-hour strike. Radio and TV news broadcasts have been cancelled and newspapers are not expected to be published for two days, while no ferries were to sail in the Ionian and Aegean seas, according to coastguard information.

The 48-hour ferry workers' strike will affect many Greek islands - some of the country's main tourist destinations - with those lacking an airport being virtually inaccessible for the duration of the stoppage.

Air traffic controllers have said they will join the strike on Wednesday, stopping work for four hours. Demonstrations are also planned in the capital, Athens, for the morning.

Other unions, including those for workers in public transport, hospitals, schools and state administration, have also threatened to stop work ahead of the vote in parliament, where lawmakers will decide whether to approve planned measures such as pension cuts and tax hikes. Together, the measures are expected to bring in 4.9 billion euros ($5.3 billion) annually.

The austerity package is a condition for receiving further tranches of money from a bailout deal agreed with the country's international creditors. Greece has been fighting to stave off bankruptcy for seven years, and is due to repay more than 7 billion euros in July to the European Central bank and the International Monetary Fund.

The country is now on its third international bailout. In return for the series of rescue loans, the government has had to implement repeated austerity packages. Although the country's finances have improved, poverty and unemployment are still rife, with the jobless rate now at around 23 percent after falling from 27 percent.

The Greek economy has, however, recently received a boost from greater tourist numbers, with many avoiding Turkey and Egypt owing to security fears. The country experienced a record season for tourists in 2016, and the upcoming summer is expected to see even higher figures.