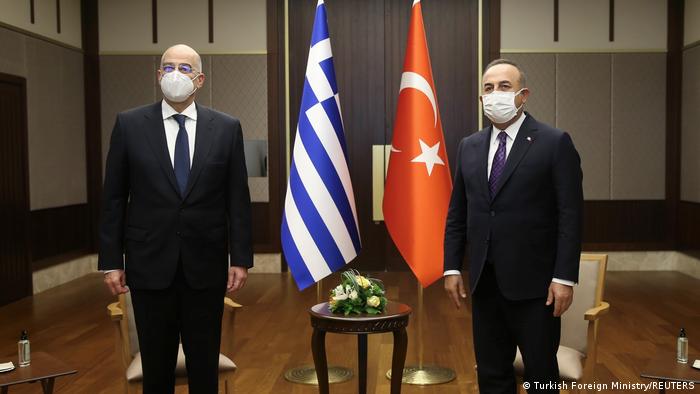 The meeting was initially intended to ease tensions, but it appeared to make things worse

A press conference that began with warm words between the top diplomats of Greece and Turkey on Thursday quickly transformed into an exchange of accusations.

Turkish Foreign Minister Mevlut Cavusoglu and his Greek opposite number Nikos Dendias met in Ankara to in an effort to smooth over months of tensions between the two NATO allies.

The two were expected to iron out issues over maritime boundaries that brought the two countries to the brink of military confrontation last year.

The meeting began cordially, but the two men were soon openly quarreling after Dendias said violations of Greek sovereignty would be met by sanctions.

He said that Turkish warplanes had violated Greek airspace several times and warned Turkey not to spread "fake news."

Cavusoglu rejected his comments as "unacceptable" and accused him of exploiting the meeting for domestic purposes.

"You come out here, and try to accuse Turkey, to give a message to your country. It is not possible for me to accept this," Cavusoglu said in response to the remarks.

Greece and Turkey, both NATO alliance members, claim the right to drill for fossil fuels in the same parts of the sea. The two sides first sat down again for talks in January after a five-year hiatus.

Cavusoglu had told Turkish TV that the two men would discuss all disagreements, emphasizing the importance of maintaining an open dialogue.

The meeting was postponed from Wednesday after a last-minute NATO summit was called.

Greece gets support from the EU

Turkey's foray into disputed waters last summer triggered a heated response from Greece, with both sides commencing military maneuvers in the region.

Turkey ultimately backed down from its exploration after it was threatened with EU sanctions. EU allies also dispatched ships to the disputed area to back Greece's claims.

The two sides have also clashed over the island of Cyprus and the flow of refugees between the neighboring countries.

The EU decided to hold off on sanctions in the end and instead proposed the expansion of a customs union and refugee pact with Turkey.