Greece's prime minister has said the country needs more time to begin returning migrants to Turkey. Under the EU deal, migrants who reach Greece should automatically be transferred there.

Refugees told to move on from Lesbos

The EU's controversial refugee deal with Turkey came into effect at midnight on Sunday but Greek Prime Minister Alexis Tsipras said the country would need more time to begin returning migrants to Turkey.

Under the plan reached in Brussels on Friday, migrants who reach the Greek islands from now on will be screened and have their identities recorded before being sent back to Turkey, where more than 2 million Syrians have escaped the civil war.

But Tsipras says the deal would need more than 36 hours to fully implement.

It remained unclear how migrants would be returned. Greek officials had previously suggested that the European border protection agency Frontex could escort chartered private vessels to Turkish ports. 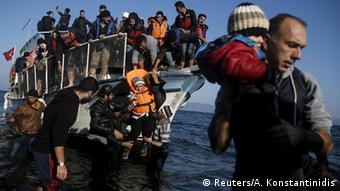 The deal aims to stop refugees crossing the Aegean Sea to Greece - often in makeshift vessels - in the hope of reaching the EU and travelling north to claim asylum in Germany or Scandinavia.

Hundreds of thousands of people have made the perilous journey in recent years and at least 4,000 have drowned, according to UN figures.

European countries have struggled to cope with the influx and the subsequent row over how to deal with the migrant crisis has split the 28-member EU bloc.

Under the plan, Turkey will receive up to 6 billion euros ($6.5 billion) in EU funds to resettle the refugees. But the mass evacuations have been denounced by human rights groups.

One for one deal

But the plan also gives a legitimate way for migrants to claim asylum in Europe. For every Syrian returned, the EU will resettle, in a safe and legal manner, one from a Turkish refugee camp.

On Saturday evening, DW's correspondent Jaafar Abdul Karim, on the Greek island of Lesbos, said around 1,200 refugees had boarded a ferry for the mainland, which was due to sail on Sunday once 2,500 people had filled the ship.

He tweeted from the port of Mytilene that Greek officials had ordered that all camps on the Greek islands be evacuated within 48 hours and that around 6,000 migrants would be taken to Kavala on the northern Greek mainland.

Once they reach Kavala, they will be placed in temporary shelters and be eligible for an EU-wide relocation program, officials said. This group would not be returned to Turkey.

Greek television reported that another ferry was due to leave from the island of Chios on Sunday.

Reporting from Lesbos, another DW correspondent, Verica Spasovska, reported that two migrants died during the crossing to the island on Saturday night.

Meanwhile, the EU was sending 2,300 security and legal experts to assist Greece in evacuating the migrants. Germany and France will each send around 300 officials, as well as provide "technical expertise."

Greek officials estimate that more than 47,000 undocumented migrants are still in the country. In March alone, more than 21,000 people arrived, according to figures from the United Nations refugee agency (UNHCR).

In recent days, the number of arrivals has increased again, with 1,500 people reaching the Greek islands on Friday.

A Greek Coast Guard suggested that migrants may fear the door to Europe is being closed by the signing of the EU-Turkey deal on Friday. "They want, whatever it costs, to get to Greece and therefore the EU," said the officer on the island of Chios.

Also, a tense situation remains in the makeshift Idomeni refugee camp close to the Greek border with Macedonia, where around 10,500 migrants are stuck after the so-called Balkan route to northern Europe was closed by transit countries.

"We are worried that (the standoff) could lead to violence or even to a storming of the Macedonian border fence," a police office from the provincial capital Kilkis told the German news agency DPA.