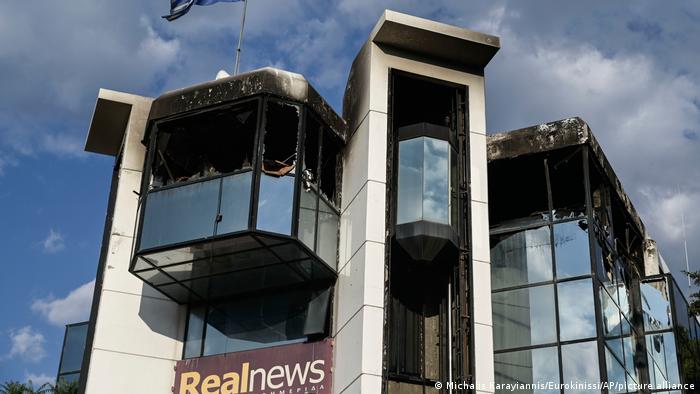 The explosion and subsequent fire caused considerable damage to the building

The office of the Greek news outlet Real News and Real FM radio in Athens was set ablaze on Wednesday in an apparent arson attack, the media group said.

The blast came in the early hours of the morning and took 18 firefighters two hours to bring under control. People were evacuated with some being taken to the hospital with respiratory problems.

Police investigating the cause of the fire said they had found several gas canisters taped together on an outside staircase between the basement and first floor of the building.

"They set Real FM on fire! They're burning us! Three explosions and now we're on fire…" editor Nikos Chatzinikolaou wrote on Twitter.

Real FM says it is a target

The outlet reported that preliminary information pointed to a connection with the ongoing hunger strike by the imprisoned anarchist Yannis Michailidis. 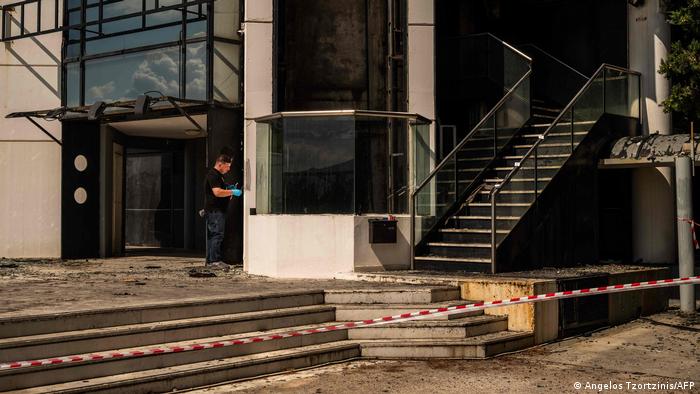 The explosive device was found on an exterior staircase

It also pointed to serious damage dealt to the broadcaster's transmission equipment on Tuesday, which it said could be linked to Wednesday's attack.

"Two incidents, that are difficult to consider random… Someone is trying to shut down Real FM," the website said.

Real News is a center-left outlet that features both pro- and anti-government voices.

Greek Prime Minister Kyriakos Mitsotakis said, "The state will do everything to bring the perpetrators to justice."

"Any attempt to target journalists must be condemned," he added.

Investigative journalist Giorgos Karaivaz was killed in an attack in the middle of the day outside his home in April last year. RSF has said that the investigation into his death has not made progress.

The Greek capital is a stronghold for anarchist groups that have carried out repeated attacks on newspapers, government offices, and political party offices.