Greece hopes to strike a deal with Gazprom soon | Business | Economy and finance news from a German perspective | DW | 21.04.2015

Greece hopes to strike a deal with Gazprom soon

Greek PM Alexis Tsipras and the head of Russian gas giant Gazprom have reportedly agreed to set up a working group to promote the creation of a pipeline which will transport Russian gas to Europe via Greece. 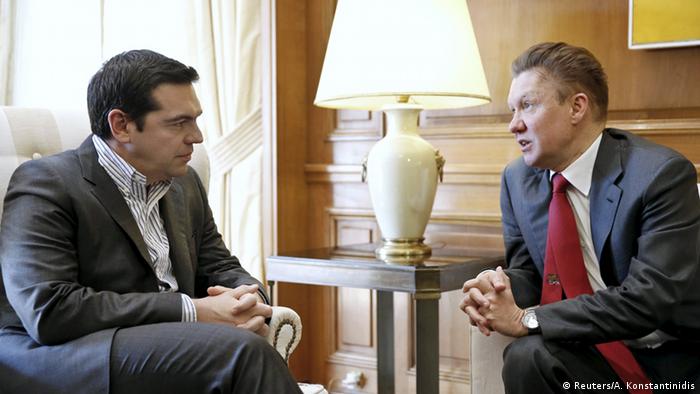 The Greek prime minister and Gazprom chief Alexei Miller held talks in Athens on Tuesday over a multibillion dollar gas pipeline project. Reports said both sides would work towards setting up a "road map" detailing the responsibilities the two parties would commit to in the coming months.

Government sources said Athens hoped an agreement would be signed shortly. The proposed pipeline, which has not been approved by the European Union, could deliver Russian gas through Turkey and Greece to Europe.

The visit by Miller came after Tsipras met Russian President Vladimir Putin in Moscow at the beginning of April and expressed his country's interest in taking part in the so-called Turkish Stream gas pipeline project.

The pipeline is expected to transport Russian gas though Turkey and then in to Europe by 2017. Some observers, however, doubt the pipeline will be built on time, or even at all.

"The pipeline is of big interest to our country and is among our priorities," said Greek Energy Minister Panagiotis Lafazanis. "We are continuing talks with the Russian side and we hope to reach an agreement very soon," he added, terming the talks as constructive.

According to the Greek Kathimerini newspaper, Athens stands to earn several billion dollars in advance of the deal. However, Lafazanis declined to comment when asked by reporters about any advance payments.

Talking to reporters after meeting Tsipras, Gazprom's Chief Executive Alexei Miller also did not make any reference to any advance payments to Greece from the pipeline.

Greece is heavily dependent on Russian energy imports and is looking to negotiate a deal with Moscow for the reduction of the price of gas that it imports from Russia. Furthermore, Athens has indicated its interest in becoming a European hub for the natural gas pipeline project.

Greece is quickly running out of cash as the leftist-led government under Tsipras is struggling to strike a deal with its international lenders on the country's bailout terms and come up with credible reforms.

Russia, on the other hand, is moving ahead with its plans to build the Turkish Stream project to Turkey and further out to Greece via the Black Sea, in line with its aim to stop exporting gas via Ukraine by 2019.

Miller said Gazprom would pump up to 47 billion cubic metres (bcm) via Greece through the pipeline, which would be implemented strictly according to the EU law.

The German finance minister has welcomed the possible gas pipeline deal between Russia and Greece. But he expressed skepticism about an agreement on Greece's debt when EU finance ministers meet in Riga next week. (18.04.2015)