Germany has kicked off a weekend of celebrations to mark the 25th anniversary of the fall of the Berlin Wall. Among those in Berlin for the festivities is former Soviet leader Mikhail Gorbachev. 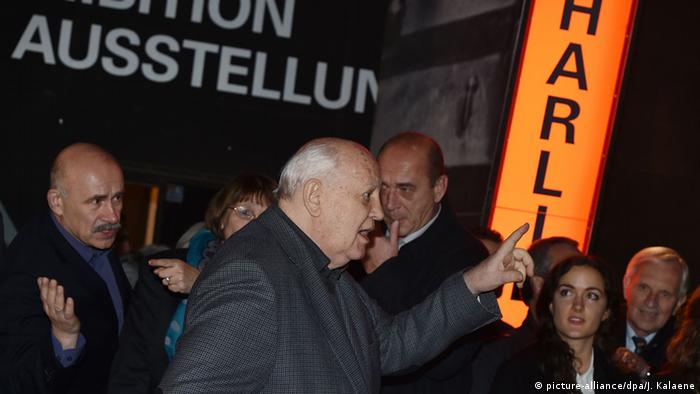 Gorbachev, whose "perestroika" and "glasnost" reforms to the Soviet Union of the late 1980s helped make the fall of the Wall possible, visited one of the former border crossing points between the former East and West Berlin, "Checkpoint Charlie," on Friday evening.

Speaking to onlookers at the iconic Cold War site, Gorbachev, now 83, stressed the importance of reducing current tensions between the Kremlin and the West over the crisis in Ukraine.

"We now have to watch out that we don't miss the right moment, that we get a grip on the tensions that have emerged recently," he said, speaking through an interpreter.

He also stressed the importance of Russia and Germany, which has sought to help mediate in the Ukraine crisis.

"We always have to think of the lessons of the past," Gorbachev said. "And we have learned from the past that when Russians and Germans understand each other ... when our relationship is good, then everyone is well off, not just our two peoples. This means, we should be careful it stays that way."

On Thursday, the former Soviet leader had said he planned to use his trip to Berlin to defend Russian President Vladimir Putin's foreign policy, which has put him at odds with the West, saying he was "absolutely convinced that Putin protects Russia's interests better than anyone else."

Looking back on the events of November 9, 1989, when the East German authorities opened the first checkpoint in East Berlin to allow its citizens to freely cross into the West of the then-divided city, Gorbachev, who was greeted with cheers when he arrived at Checkpoint Charlie, said he was "proud" of his role in the historic event.

Also on Friday evening a 15-kilometer (9.3 miles) path of lights was illuminated, marking where the Berlin Wall once stood.

Earlier on Friday, dissident singer Wolf Biermann, who was kicked out of East Germany by authorities, played a protest song in the Bundestag lower house of parliament. He used the appearance to take a swipe at the Left party, which partially has its roots in the former East German communist party.

The celebrations are to culminate on Sunday, with two million people expected to attend an outdoor festival at Berlin's Brandenburg Gate.

There had been concerns that many would have trouble getting to Berlin for the event on Sunday, due to a train drivers' strike that had been scheduled to continue until Monday morning. However, theGDL trade union announced on Friday afternoon, that its drivers would no return to work at 18:00 (17:00 UTC) on Saturday.