Borussia Mönchengladbach beat Leverkusen 3-0 to all but secure a Champions League place. Bayern suffer a fourth defeat in a row, Borussia Dortmund win at home, and Stuttgart get three points in their relegation fight. 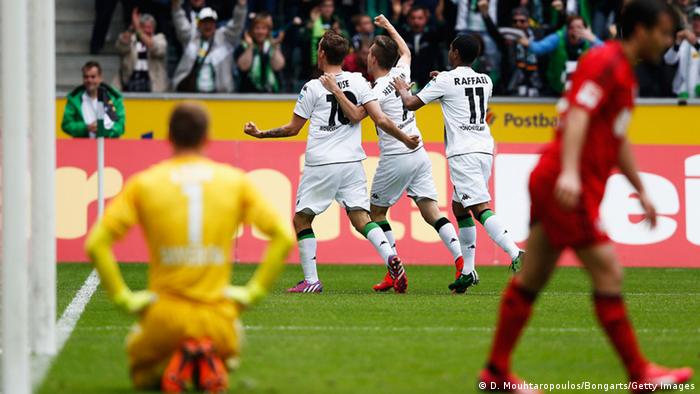 Just two points separated Mönchengladbach and Leverkusen in third and fourth before the game. The Foals were looking to virtually seal a top-three finish with a win. And the tightness between the two in the league table was evident in the opening half hour, with no efforts of note on either goal.

Just after the half-hour mark, Leverkusen had the ball in the net. Stefan Kiessling headed past Yann Sommer, who attempted to collect from an inswinging free-kick. However, the striker was inches offside. Before half-time Gladbach were unlucky to not have a spot-kick. Patrick Herrmann raced into the penalty area and was brought down by Lars Bender who didn't appear to get much of the ball. But Peter Gagelmann's whistle remained silent.

The second half sparked to life immediately as the Foals took an early lead. Herrmann was sent on his way down the right, before playing a pass that Max Kruse couldn't refuse. Gladbach's top scorer placed his effort calmly into the top corner. Kiessling almost had the visitors level with 25 minutes to play. Hakan Calhanoglu stole the ball from Granit Xhaka and crossed to the back post, but Kiessling couldn't tap home.

With 10 minutes to play, the Foals secured the home win. After a failed Christoph Kramer free kick, Raffael forced a save from Bernd Leno, but the ball fell straight to Herrmann to convert. Gladbach added some icing on the cake just before the end. Substitute Ibrahima Traoré scored an almost identical goal to last week's winner at Hertha, curling into the top corner on his favored left foot.

The Foals are now 12 games unbeaten in the Bundesliga and five points ahead of Leverkusen. The Champions League beckons. 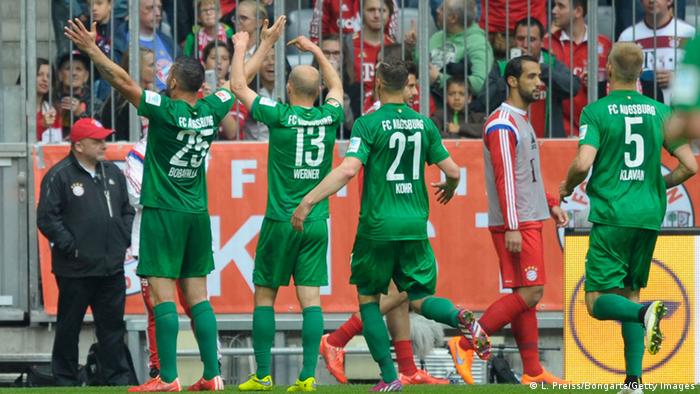 Wearing their new 2015/16 kit, Bayern Munich were trying to stop the rot of after three defeats in a row. Augsburg, looking to maintain a Europa League place, had the better start – Raul Bobadilla bent a free-kick at Pepe Reina within the first two minutes.

And the two would meet again soon after. Bobadilla was played in behind, touching the ball under the oncoming Reina, who wiped-out the striker. The result: a penalty for Augsburg and an early shower for Reina. Bayern's ‘back-up' Manuel Neuer replaced Philipp Lahm and up stepped captain Paul Verhaegh. The full-back sent the penalty off the post – his first miss from twelve yards for the club.

Augsburg continued to look the better side, though, and had Halil Altintop connected with his effort just before half-time, they could have led. Robert Lewandowski hit the crossbar just before the break with Bayern's best first-half effort.

Bayern dominated possession, but producing little heat on Marwin Hitz in the Augsburg goal. And the underdogs made their one-man advantage count with 20 minutes to play. Bayern loanee Pierre-Emile Höjbjerg flew forward down the left before finding Bobadilla in the middle. The Paraguayan scored his tenth goal of the season, beating Neuer with a cheeky back-heel.

It was Bayern Munich's fourth defeat in a row - the first time that's happened since 1991. 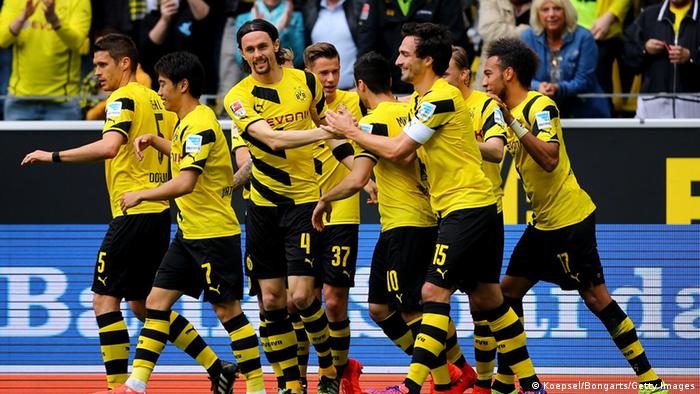 Dortmund were looking to maintain their position in the league ahead of the German Cup final - both avenues for qualification to the Europa League. And they enjoyed a perfect start. Inside ten minutes, Henrikh Mkhitaryan's inswinging corner found an unmarked Neven Subotic who nodded past Thomas Kraft.

Mkhitaryan should have had a goal of his own after 15 minutes. Cutting in and out of John-Anthony Brooks, the Armenian dragged shot inside the box past the post. Chances were few and far between for the remainder of the first half, as Hertha began to grow into the game despite the deficit.

Dortmund doubled their lead with their first attack of the second half, with Mkhitaryan finding Erik Durm on the run. The fullback cut inside from the right onto his left foot and curled past Kraft into the far bottom corner for his first goal in the Bundesliga. 2-0 was how it ended in Dortmund, with BVB climbing above Werder Bremen into seventh and Hertha staying on the cusp of the relegation battle. 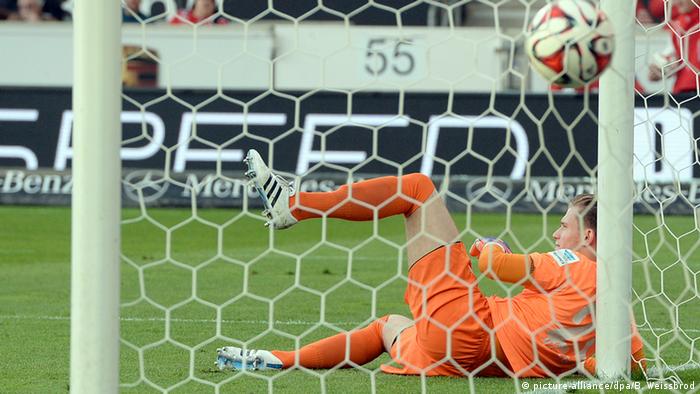 It was apparent right from the start in the Mercedes-Benz-Arena that Stuttgart knew the time had come to put up or shut up. The home side came out with far more energy than Mainz, who had nothing at stake, and nearly went ahead inside half an hour. Daniel Didavi was unlucky to only hit the post with a curling shot, before Daniel Ginczek blasted over the crossbar from close range.

The teams went into the dressing rooms with the match scoreless. And there was little sign of inspiration in the first fifteen minutes after the restart, either. Instead it was a mistake by Mainz keeper Loris Karius that put Stuttgart on the road to victory.

With 65 minutes played, Didavi fired a speculative shot from 30-yards out. Karius flapped at the ball, and it rebounded in off the post. Out of nowhere, Stuttgart had taken the lead, and their best player on the pitch had provided it.

They doubled the lead thirteen minutes later. Mainz failed to clear their lines, and Filip Kostic pounced, hammering the ball into the back of the net after Martin Harnik's cut-back. Stuttgart remain last in the table, but are only one point and a worse goal differential away from safety. That's how close the relegation battle is in the home stretch of the 2014-15 season. 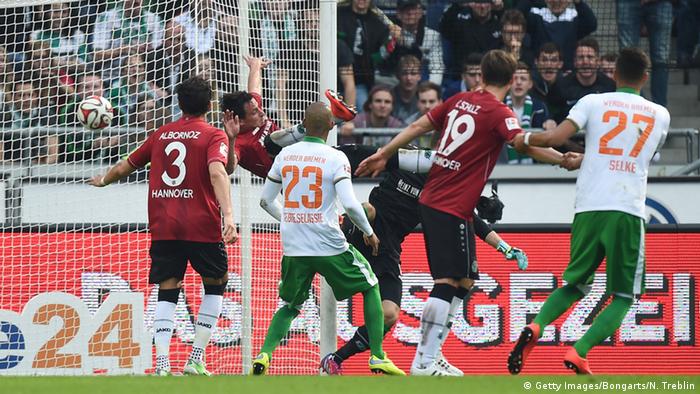 In an opening quarter with few efforts on goal, it was home side Frankfurt who broke the ice. Bastian Oczipka curled his shot in for Eintracht's first goal in four games at the perfect time. Like London buses, when you wait a while for one, two come along at once – the same for Frankfurt goals. Haris Seferovic sprinted in behind the Hoffenheim defence, with a hint of offside about his run, finished past Oliver Baumann at the near-post to double the home lead. Two became three soon after – Timothy Chandler nodding on an Oczipka scoring his first goal of the season to give Frankfurt a 3-0 half-time lead.

Kevin Volland made the second-half interesting by curling in a stunning free-kick five minutes after the break, but that'it finished 3-1 in Frankfurt.

Hannover's long winless run must come to an end soon for them to keep up hope of staying in the Bundesliga. Captain Lars Stindl, Mönchengladbach bound come the summer, sent the HDI-Arena into raptures inside 25 minutes. Jimmy Briand rose highest to flick the ball over the Werder defence for Stindl who finished with composure past Koen Casteels.

But in the 78th minute, home fans' hopes were dashed, as one of the Bundesliga's best with a free-kick, Zlatko Junuzovic, curled an effort into the only spot Ron-Robert Zieler couldn't quite reach. It was Junuzovic's fifth goal from a free kick this season. The 1-1 draw left Hannover level on points with Paderborn in 16th place.

Friday's Bundesliga match was a relegation fight featuring Hamburg and Freiburg. The visitors had the better chances but were undone by their wastefulness in front of goal. Hamburg clawed out a late 1-1 draw. (08.05.2015)