Merkel wants approved refugees to get help finding a job immediately. She also praised the work of civil servants processing asylum applications during a visit to their offices in Berlin. 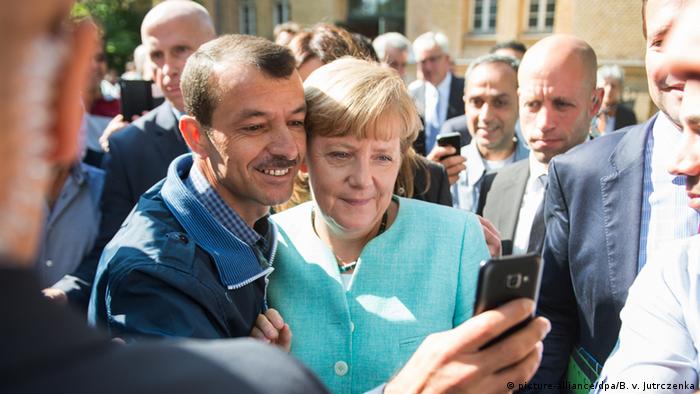 On a visit to the Berlin branch of the Federal Office for Migration and Refugees (BAMF), Merkel praised the work of civil servants who are struggling to process the ever growing number of applications for asylum.

"I saw first hand that the work here is being done in a very accurate way and that every case is being taken very seriously," she told reporters outside the Office for Migration.

Merkel, who also visited a refugee shelter in Berlin on Thursday, stressed that it was crucial for the Migration Office and Germany's Labor Agency (BA) to coordinate efforts to get approved refugees into work quickly.

"I think this pilot project between the BA and the BAMF [Migration Office] stands for what we want to achieve in the coming months," she said, adding that in an ideal world, refugees should be able to use the Labor Agency's services as soon as they have the right to stay in Germany.

The Office for Migration has been struggling to cope with the enormous number of applications in recent months. This year alone some 800,000 people are expected to seek asylum in Germany. The federal government has decided to hire several thousand additional staff, but regional governments have complained that the process takes too long.

It takes five months on average to process an asylum application. The government wants to reduce that to three months, also to take the pressure off refugee shelters.

While the EU struggles to find a united response, migrants are streaming along the Balkan route. Tired, hungry and weak, their journey is fraught with risk. Lidija Tomic reports from the Serb-Hungarian border. (10.09.2015)

Denmark has resumed rail traffic across the German border one day after police stopped trains carrying Sweden-bound refugees. Traffic across the border has continued to be highly controlled by authorities. (10.09.2015)