Ursula von der Leyen has tried to sway socialists and liberals on a possible Brexit delay. She also confirmed she'll step down as German defense minister, regardless of whether she is successful in her EC presidency bid. 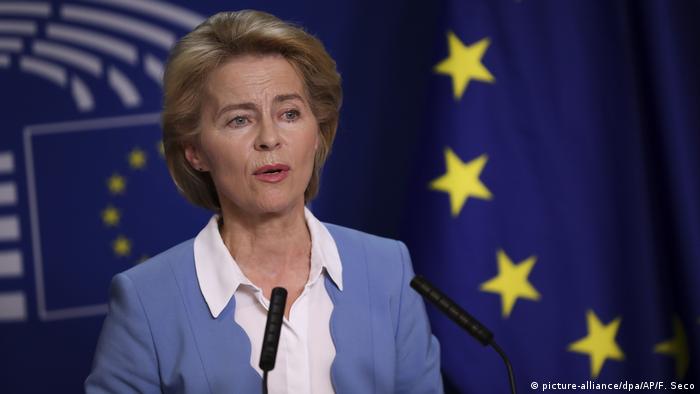 German Defense Minister Ursula von der Leyen, the nominee for European Commission president, on Monday said she would support giving the UK more time to negotiate its exit from the European Union.

The pledge was part of a series of promises to persuade socialist and liberal EU lawmakers to back her as European Commission president ahead of the vote on Tuesday.

The socialist and liberal wings — the second- and third-largest behind von der Leyen's center-right European People's Party — had called for further details from the conservative politician on a number of policy areas.

"If elected, I am ready to pave the way to the ambitious and strategic partnership we want to build with the United Kingdom," von der Leyen said in letters to the socialists and liberals in the European Parliament. "Should more time be required and should there be good reasons provided, I will support a further extension if good reasons are provided."

Will quit her current role

Von der Leyen, hitherto the German defense minister, also confirmed she will resign from her position, irrespective of whether she becomes Commission president or not.

She wrote on Twitter: "Tomorrow I will ask for the confidence of the European Parliament. Regardless of the outcome, I will step down as Minister of Defense on Wednesday in order to serve Europe with all my strength."

German Chancellor Angela Merkel was quick to offer her support. Merkel said that she respected von der Leyen's decision and that it was clear the minister was moving "into a new phase."

Earlier on Monday von der Leyen said she will also support cutting the EU's carbon emissions up to 55% by 2030. She pledged to introduce a "carbon border tax" and to extend the bloc's emissions trading scheme.

In response to the socialists' demands, von der Leyen said she would push for fair minimum wages across the EU to help build a "more tolerant, fair and equal society" and an unemployment benefit scheme.

In a letter to the liberal Renew Europe group, whose 108 EU lawmakers are also undecided on her candidacy, von der Leyen further pledged to address challenges and opportunities presented by the digital age.

Within her first 100 days in office, she promised to put forward legislation for a "coordinated European approach on the human and ethical implications of artificial intelligence."

Von der Leyen will address the 751-member European Parliament in Strasbourg on Tuesday. Lawmakers will then hold a debate and proceed to vote for or against her in a secret paper ballot at 6 p.m. local time (1600 UTC).

She will likely require a share of the socialists' 153 seats to reach the required 374-vote majority in parliament. The group's 16 German members have vowed not to support her.

'Deep trouble for many weeks'

David McAllister, a European lawmaker who also belongs to the CDU, told DW that he was confident von der Leyen "will be able to get a qualified majority" in the EU Parliament.

"This is a secret ballot and nobody knows exactly what will happen. But my impression is that more and more MEPs know exactly what's at stake," McAllister said, adding that "if Ursula von der Leyen isn't elected tomorrow we will be in deep trouble for many many weeks."

"All MEPs from the European People's Party will support her. But... we're only 182. We need other colleagues from other political groups to support Ursula von der Leyen."

Merkel wants German Social Democrats to stop thwarting Ursula von der Leyen's bid to lead the EU Commission. Many officials domestically and across the bloc say the defense minister's bid for the job was forced through. (12.07.2019)

Only one third of Germans believe their defense minister, Ursula von der Leyen, is a good choice to lead the EU Commission, according to a survey. Many believe the state is too lenient with Neo-Nazis. (04.07.2019)

The German defense minister was grilled by Green, Socialist, and free-market liberals as she faces an uphill battle to secure the European Commission presidency. Many are unhappy with the process of her nomination. (10.07.2019)