The Hochmoselbrücke or "High Mosel Bridge" has opened to traffic. The controversial structure brings a road project connecting Germany to Benelux a step closer to completion. 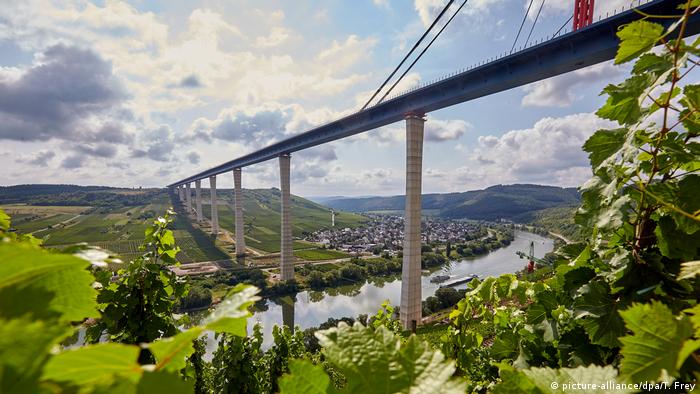 Public traffic flowed for the first time across what is now Germany's second-highest road bridge on Thursday afternoon.

The Hochmoselbrücke, or High Mosel Bridge, stretches 1.7 kilometers (1 mile) across and 160 meters (524 feet) above the Mosel River in western Germany.

Within Germany, the new bridge in the Rhineland-Palatinate is second only to the 185-meter-high Kochertal bridge in the southern state of Baden-Württemberg.

Authorities expect about 25,000 vehicles a day to cross the bridge that now provides a direct link between the regions of Eifel and Hunsrück.

Several hundred people gathered for the bridge's opening on Thursday. Over the weekend, thousands of pedestrians crossed the bridge by foot as part of the opening festivities. 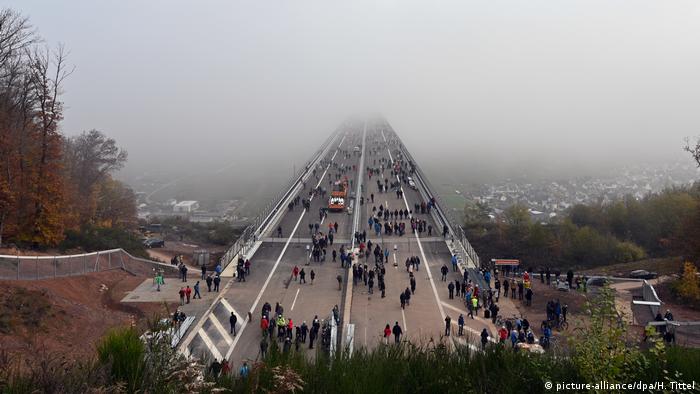 "Today is a good day for the Rhineland-Palatinate," said State Premier Malu Dreyer. She added that she was convinced "that the bridge will help advance our economically strong state even further and will strengthen ties between the people in Eifel and Hunsrück."

The controversial building project kicked off eight years ago. Some critics argued that the massive bridge would destroy the area's idyllic vineyard landscape, while environmentalists argued it would pollute the ground water.

Others spoke out against the cost. The building of the bridge was part of a greater road project that included the construction of an additional 25 kilometers (16 miles) of federal highway. The total project is estimated to havecost €483 million ($535 million), with €175 million dedicated to the bridge alone.

The opening brings an end to what had been the largest ongoing construction project in Europe.

The bridge and the new stretch of federal highway constitute part of a larger, long-distance road project that will eventually link the Rhine-Main area near Frankfurt with the states of Belgium, the Netherlands, and Luxembourg.