German Finance Minister Olaf Scholz said on Wednesday the European Union needs to increase its pace regarding leading banking projects and signal a willingness to compromise on the EU-wide bank deposit reinsurance, in an op-ed for the Financial Times.

Scholz said failure to do so could be costly and leave the bloc vulnerable to "being pushed around on the international stage," particularly in light of the imminent withdrawal of the United Kingdom from the Union, Scholz wrote in a guest article for the global business publication.

He said that due to Brexit, it was time for the bloc to promote better integration of its banks, especially with the loss of London, the EU's largest financial center.

He added: "The need to deepen and complete European banking union is undeniable. After years of discussion, the deadlock has to end."

The long-discussed joint deposit guarantee mechanism is controversial, especially in Germany. It is feared that German savers will be accountable for problems encountered by financial institutions in Southern Europe.

However, Scholz has abandoned the federal government's long-standing resistance to the system, albeit with suggested alterations. In an eight-page document entitled "Position Paper on the Target Image of the Banking Union" submitted to German magazine Der Spiegel, the finance minister proposes a "European Reinsurance System" for bank deposits. This is intended to prevent a run on credit institutions in the event of a crisis.

This proposal would involve an EU-wide bank deposit reinsurance, a scheme that would significantly enhance the resilience of national deposit insurance.

Scholz wrote that the financial markets in Europe remain divided, with barriers to free flow of capital and financial liquidity still in existence. In addition, and partly as a result, a need for uniform taxation of banks in Europe is crucial in order for the EU to move forward.

To complete the banking union, there must be, among other things, "a form of common European deposit guarantee mechanism," the SPD politician continued. "And that is not a small step for a German finance minister," he admitted.

Scholz's comments will be contentious. Berlin has previously indicated that the initiative — in a so-called non-paper, for discussion only — was Scholz's alone and had not been approved by German Chancellor Angela Merkel. It remains unclear as to whether she will support her finance minister's proposal. 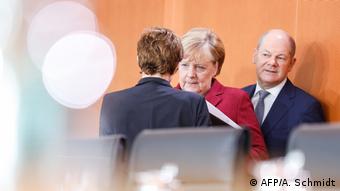 Angela Merkel and Defence Minister Annegret Kramp-Karrenbauer in conversation as Olaf Scholz looks on. It is not known to what extent Merkel supports Scholz's plans for concessions on the EU'S common deposit insurance scheme.

Scholz also said that being dependent for financial services on either the United States or China is not viable, especially as the EU was at a crossroads with Brexit on the horizon. The risk of being reliant on the aforementioned superpowers is reason enough for the bloc to make headway.

Until now, it has not been possible to further improve the institutional and regulatory framework in order to reduce risks in the European banking sector, according to the German finance minister. Now was the time for a change, particularly in view of Brexit and with the momentum of a new European Commission. Indeed, incoming President Ursula von der Leyen has also declared the completion of the banking union a priority.