He's hard to miss with his black sunglasses and cap-like blond hair: Heino is Germany's most famous folk music star and a cult figure, and at 80, he's still going strong.

Since 1967, Heino has been the most famous face of German Schlager music. The folksy style is a classic German genre that combines schmaltzy lyrics and sentimental melodies with a dollop of pop. It may be kitschy, but it is distinct. Just like Heino himself, who has kept up his image all these years. He sports very light hair and very dark sunglasses, which he has to wear due to an eye disease, and his standard "uniform" is a black turtleneck and black leather jacket, accompanied by a skull ring on his finger.

But he's not just popular in the world of Schlager. Nearly everyone in Germany knows who he is. The older generation know him for his music, the younger generation due to television commercials and appearances on the casting show Deutschland sucht den Superstar (Germany Seeks the Superstar). Also, it doesn't hurt that he's covered songs from German superstar bands like die Ärzte and Rammstein, and that he's performed at Wacken, the biggest Metal festival in the world.

'The songs aren't at fault'

People also know that Heino, whose real name is Heinz Georg Kramm, sang folk tunes that were also once belted out by the Nazis. Questioned about this, he said: "It's not the songs' fault." People also know that Heino went on tour through South Africa in 1983 and 1986, when the country was still under the apartheid regime and was internationally ostracized. This story is also familiar: in 1993, Heino recorded the Deutschlandlied, the German national anthem, but with all three verses, including the one sung during the Third Reich, "Deutschland, Deutschland über alles" (Germany, Germany above all).

In 2013, he quoted, apparently inadvertently, Hitler during an interview with the Frankfurter Allgemeine Sonntagszeitung newspaper. Responding to a question about his latest album at the time, he said: "If I fall down dead now, this is the last album. You can't know that. But I'm still as hard as Krupp steel, tough as leather and swift as a greyhound." This was something Hitler said, though in a different order, at a Nazi Party rally in 1935. It was an unfortunate choice of words on the part of Heino, which he later relativized, saying he didn't realize it was a Hitler quote. He also vehemently rejects any implications to rightist leanings. 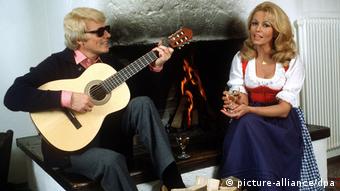 Whatever his leanings, Heino is part of the German Schlager music scene like no other: After all, in a time in which half the world is in a state of cultural and social upheaval, he preserves a piece of the German soul.

Fifty years ago, against the backdrop of the student revolts of 1968, the Flower Power movement and the Beat Revolution, the then 30-year-old singer sang of homeland, mountains, valleys and forests, of Alpine flowers, horses, Indians and cowboys. With those motifs, he sold more records in Germany than the Beatles. "In my songs, I paint a picture of an idyllic world," he reflected much later in an interview. 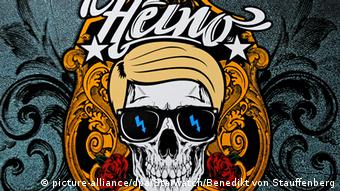 A logo to make him a true metalhead

It's remained a recipe for success for decades. Heino has also accumulated music prizes and gold and platinum records along the way. Still, he has his critics, and people poke fun and mock him, even from abroad: Punk icon and former Dead Kennedys singer Jello Biafra collected all Heino albums merely to demonstrate "what unbelievable shit music there is in this world."

Still, Heino keeps at it, even now at 80 on December 13. In his 70s, he seemed to have discovered rock music. In 2013, he released an album with cover versions of songs by fellow pop and rock colleagues, who were not only unamused, but believed their copyrights were infringed upon. Not so, as Heino covered them 1:1 and royalties were paid to the creators. 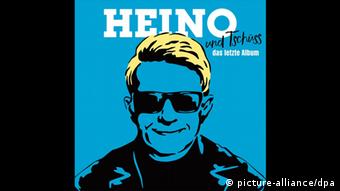 Heavy metal band Rammstein was one of few music groups who did not feel infringed upon. On the contrary, they invited Heino up on stage to sing with them at the Wacken festival. There he stood, at the time 74 years old, in front of 75,000 metal fans with pyrotechnics flashing on stage and music banging so loud as to make your ears pop, adding his touch to the Rammstein track Sonne (Sun). In 2016, he released an album covering soccer songs for the European Soccer Championships.

At 80, Heino is a man who's stayed true to himself, while still rocking on. His latest album, ...und Tschüss (...And goodbye), released in November this year, includes once again covers of other German bands, such as a Toten Hosen and Rammstein as well.

He's also said it's his last album and will take him on tour in March 2019 before he spends the last years and days of his life with his wife, Hannelore.

The Russian-German singer made it onto Forbes' top 10 of highest-paid women in music. While all the other stars on the list are international household names, "Schlager Queen" Helene Fischer is a very German phenomenon. (22.11.2018)

Signature sunglasses and platinum blond hair — Heino looks back at decades of folk and German pop music, and more recently, a foray into heavy metal. At age 80, he is a veritable music legend in the country. (13.12.2018)

Through honey-voiced starlets like Helene Fischer, folksy Schlager standards continue to unite Germans in epic song. Here are 10 legends of Schlager whose uplifting melodies and schmaltzy lyrics will forever live on. (13.07.2018)