German Defense Minister Karl Theodor zu Guttenberg has paid a visit to the country's troops in Afghanistan while pushing ahead with plans to drastically reduce the number of soldiers in Germany's military. 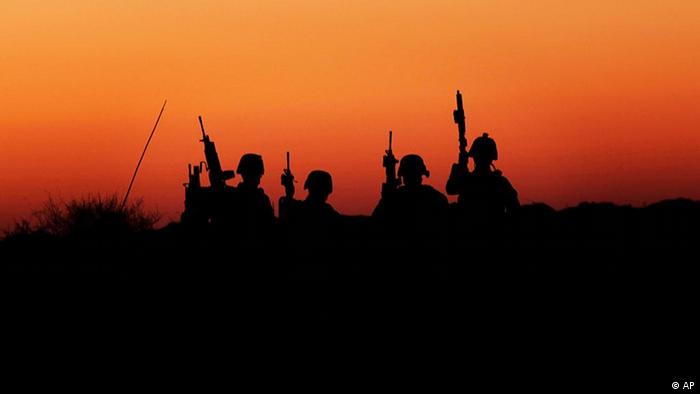 Germany currently has some 4,600 troops in Afghanistan

Guttenberg and Lammert met with the German contingent serving with the International Security Assistance Force (ISAF) in Mazar-i-Sharif in northern Afghanistan. Their visit began with a commemoration ceremony to fallen German soldiers.

"We want to demonstrate with our visit that the parliament stands behind the Bundeswehr," Lammert said.

Lammert presented the soldiers with a flag that had flown over the parliament in Berlin, saying it should be a symbol of the connection between the Bundestag and the Bundeswehr army.

"Parliament knows that it can count on the Bundeswehr," Lammert told soldiers. "You should know that you can count on parliament." 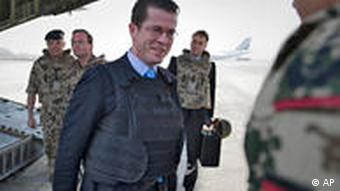 Guttenberg wants to reduce the German military by at least 70,000

Meanwhile, in an interview for the newspaper Bild am Sonntag, the defense minister, who is planning to revamp the armed forces, said he would paint "no glamorous picture" of the country's military.

"Today, with 252,000 soldiers, we can make available a total of not more than 7,000 for international campaigns," said Guttenberg, who has visited Afghanistan five times since assuming his post last October.

The minister has advocated slashing Germany's troop levels to a maximum of 180,000 soldiers. This reflects "not the state of (Germany's) funds, but rather the demography," Guttenberg said, citing Germany's shrinking population.

Critics have said that a reduction of the Bundeswehr's size would be solely motivated by budgetary constrictions and would limit the military's ability to train soldiers.

The Bundestag in February extended Germany's military engagement in Afghanistan and increased the upper limit of German troops authorized to serve there from 4,500 to 5,350. There are currently around 4,600 German soldiers on assignment in the country with that number expected to rise to 5,000 by the year's end.

Germany's defense minister, Karl Theodor zu Guttenberg, has visited Afghanistan to see Bundeswehr soldiers in action there. However, one base visit was called off due to fighting with Taliban militants. (16.07.2010)