Thousands of people in Germany have rallied again to protest over the gap between rich and poor. Activists camping outside the European Central Bank in Frankfurt have vowed to remain for the next two weeks. 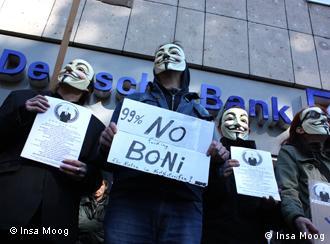 Thousands protested against excess in the banking industry

Thousands gathered across Germany on Saturday to protest over wealth inequalities and a perceived lack of transparency in the financial services industry.

According to police figures, about 2,500 people rallied in Frankfurt to march on a route that took them past the headquarters of both the German national bank and the European Central Bank (ECB).

The activist group Attac, which organized the event, said at least 5,000 had attended.

Members of the Occupy Frankfurt group, which has been camped outside the ECB for the past two weeks, have said they plan to remain at the site for two more weeks. 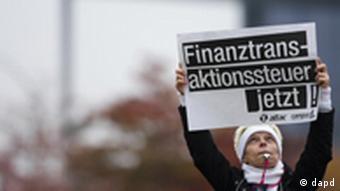 Some want specific measures to be introduced, such as a tax on financial transactions

Among the more satirical of the protests was a group of young people dressed in ball gowns and suits, chanting "We are the one percent, we are rich and you are not," as their slogan.

Organizers said that further protests were planned in both cities for November 12.

The German demonstrations on Saturday were the latest to be inspired by New York's Occupy Wall Street movement and the Spanish "indignant" protests.

In London, several hundreds of protesters against economic inequality have been camped outside St. Paul's Cathedral for the past two weeks.

Occupy protests have also continued across the United States, where the movement began in mid-September.

In an interview with Deutsche Welle, former Democratic presidential candidate George McGovern explains why he wants to visit the Wall Street protestors and why Barack Obama will do better in a second term. (24.10.2011)

Thousands of 'Occupy' protesters took to the streets again this weekend in Germany. Some are permanently camped out in Frankfurt's banking district, despite the onset of winter. (23.10.2011)

Anti-banking protests continue on the streets of Germany

Hundreds of thousands of people have taken to the streets across the world in protest against big banks and corporations. In Germany alone, around 40,000 people demonstrated and the dissatisfaction is growing. (16.10.2011)