′Occupy Frankfurt′ protesters defy the cold | Germany | News and in-depth reporting from Berlin and beyond | DW | 23.10.2011

Thousands of 'Occupy' protesters took to the streets again this weekend in Germany. Some are permanently camped out in Frankfurt's banking district, despite the onset of winter. 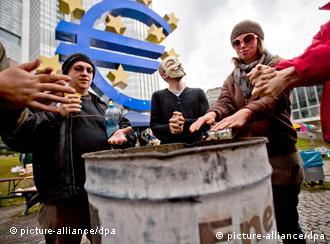 Shortly after nine a.m. there is still dew on the grass. Most of the 70 colorful tents in a park in the middle of Frankfurt's banking district are closed. It looks like the campers are still asleep. But some of them are already up in search of coffee in front of the big white tent.

Luc, a student from Canada, is standing behind a camping table holding a thermos flask. "I'm backpacking through Europe at the moment. Two weeks ago I was in Berne and then I hitchhiked to Frankfurt," he says.

Since then, he's been working non-stop in the kitchen tent, keeping around 100 protesters fed and watered. "If we have enough ingredients, we make food. We have sandwiches all day and there's hot food whenever we manage to get it something done," he explains. 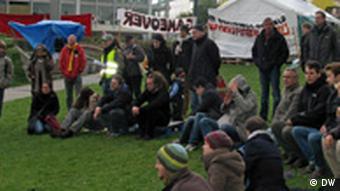 There are several assemblies each day, where decisions are made

The kitchen tent is right next to the giant blue euro sign in front of the European Central Bank. Around it are lots of hand-painted placards, one reads "Revolution Now," and it looks a bit weather-worn.

A middle-aged man gives Luc four bags of apples, nodding at him encouragingly. "I've bought these to show my solidarity with the demonstrators," the man says. Luc is beaming and places the apples in the makeshift pantry, with the flour, the sausages and the jam - all donated by local people.

Around midday, everybody is up and about and the queue in the kitchen tent is getting longer. Anna, a student dressed in a thick jumper, a scarf and legwarmers over her boots, is in charge of the information stand. She is poring over the list of the day's planned assemblies. There are four of them that day and there will be a meeting for a working group on flyers and placards.

The group doesn't have a permanent spokesman and doesn't really want one either. Members coordinate efforts with their fellow protesters in New York, Madrid and London via Facebook, where they set dates for the protests and then organize everything else on location.

"That's our style really," Anna says. For the last 10 minutes she has been talking to a man in a tailor-made black suit, who has been looking at the placards. "Are you criticizing the ECB's decisions?," he asks. "Yes, we're basically questioning everything," she replies firmly, if slightly amused.

Anna doesn't have a solution to the financial crisis, but that is not really the point of the movement. "For now, we just want to show that we can't carry on like this, nothing more, nothing less," she says.

The man in the black suit takes a flyer and slowly walks towards the ECB building. He works there, but doesn't mind the protests that have been going on here for the past two weeks. "I understand them," he says. "Drastic and difficult cuts will have to be made in Greece for example, perhaps even here in Germany, so the protests are completely understandable."

Along with globalization critics Attac, and Spain's Indignados movement, the 'Occupy' group has called for a meeting in the Frankfurt office of the German Trade Union Federation (DGB). One of the Spanish participants wears a sharp suit and tie with glasses, and says he works as a consultant. 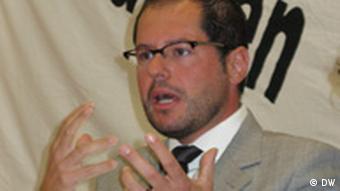 Claudia and Erik represent the 'Occupy' group at this meeting; they're here to explain to journalists why they are camped out. Claudia tells them that this new movement is different, that it's important that everyone is heard and people act as a community.

"All decisions are achieved through debate in our assemblies," she explains. "We then make decisions based on consensus that are binding for everyone."

The group does not mind having members of Attac and the union federation with their clear structures and manifestos joining them at the meeting. But Harald Fiedler from the DGB rejects any notion that his organization is capitalizing on the new movement.

"t would of course be fatal if, in a situation like this, the unions did not have a point of view, and wouldn't participate and protest in any way," he says. The 'Indignados' agree. "We see it as a pluralistic movement, which makes it powerful, we're kindred spirits."

Then they announce the date of the next demonstration, before they are off again to attend their next assembly at the camp. In front of the ECB building, around 30 protesters are waiting, sitting on wooden pallets. They are discussing preparations for the next protest, whether it would make sense to have a manifesto and who will talk to the media the next day. Slowly, it starts to drizzle and a cold wind blows across the square. But nobody seems to care much about that.

In an interview with Deutsche Welle, former Democratic presidential candidate George McGovern explains why he wants to visit the Wall Street protestors and why Barack Obama will do better in a second term. (23.10.2011)

In Frankfurt, hundreds set up a makeshift village of tents outside the European Central Bank to protest against disparity and corporate greed. In London, a camp-out outside St Paul's Cathedral entered its third day. (17.10.2011)

In the wake of massive protests across Europe and the world against the financial sector, EU leaders have said they understand the frustration and that greater financial regulation is necessary. (17.10.2011)