′I feel a kinship with the people patrolling in front of Wall Street′ | News and current affairs from Germany and around the world | DW | 24.10.2011

In an interview with Deutsche Welle, former Democratic presidential candidate George McGovern explains why he wants to visit the Wall Street protestors and why Barack Obama will do better in a second term. 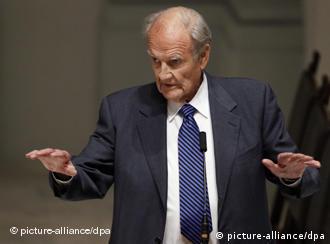 Senator George McGovern is one of the leading liberal figures in American politics. He was the Democratic candidate in the 1972 presidential election, but lost to Richard Nixon. McGovern also served in the House of Representatives and Senate and was one of the earliest opponents of the Vietnam War. Throughout his political career and thereafter he dedicated himself to the fight against hunger in the US and the world and played a key role in the creation of the UN World Food Program. In 2001 he was appointed as its first Global Ambassador on Hunger.

Deutsche Welle: You were a child during the Great Depression. What is your sense of the economic situation right now in the US with poverty rising, does it compare to that time?

Senator George McGovern: I was born in 1922 in South Dakota which was hit as early as that by the depression. We usually think of the depression beginning in 1929 with the collapse of the stock market, but in farm states it began in 1921/22 right after World War I. We lost all of our war time markets in Europe and elsewhere, so the price of corn, wheat and soybeans and other key commodities collapsed.

You were one of the first US senators to oppose the Vietnam War. What do you feel today when you look at the Occupy Wall Street protests across the US, is there a connection, do you feel a kinship with those protestors?

I do feel a kinship with the people who are now patrolling in front of Wall Street because these are ordinary Americans. They represent both parties, they represent the Independents and what they are trying to do is to force an explanation of the role of the great banks, the great finance houses in throwing us into recession. Many Americans believe that there is a connection between the bad conduct of the banks and the corporations and the recession. And these people who are demonstrating up and down Wall Street are trying to force that question out into the open where they can get an answer.

Do you think that they can have a lasting impact or will it just go on for a few weeks or months and than fizzle out eventually?

But unless things improve significantly I think there is going to continue to be expressions of concern about the American economy and questions about what the cause is. Why didn't the big banks, the big finance houses, the Wall Streeters, why didn't they take steps to head off this recession? If they were powerless to do so, let's find that out. And that's what these protestors are trying to do. They want to know why the richest country in the world suddenly went into a recession and what the causes were. And I think that's a question worth answering.

Have you been to any of the Occupy Wall Street or the other Occupy demonstrations around the US or are you planning to attend one?

I want to go and see what it's like from the inside. So when I get back to the United States I am going to call them and say I'd like to come by one afternoon and participate.

There is also the 99 percent movement which has spawned the Wall Street movement which is basically trying to bring attention to the growing gap between the rich and poor in the US. You were one of the first people to bring attention to the world wide food crisis when you started the Peace for Food program and later you were instrumental in the creation of the World Food Program. What is your reaction to the latest government statistics that say that the number of poor Americans is at the highest level since 1993 and that the total number is now the highest since the Census Bureau began publishing figures?

One of the good things we can say about bipartisanship is that it sometimes makes for better answers to crises like the hunger problem. Bob Dole, the Republican leader in the Senate, and I teamed up back in the 1970s after we both had a taste of running for president and we formed a bipartisan coalition in which we doubled the food stamp program in America for low-income people. We doubled the school lunch program, we started a new program called WIC (Women, Infants, Children), for low-income pregnant and nursing women. Who can be against helping poor women and kids? Bob Dole's a conservative, I am a liberal, but we work hand in glove on legislation like that.

Now as you say there is hunger around the world. We have about six and a half billion people in this world and a billion of them never have a decent meal. They are not all starving to death, but they're hungry, they're undernourished, they're malnourished. These new drugs on AIDS don't work with people who are malnourished which a high percentage of the people of Africa are. That's where AIDS is the worst and that's where we have the worst malnutrition and therefore even these newly developed AIDS medications don't work very well. It's just common sense: If you are run-down, with a gaunt frame, a curve where most of us have a curve the other way on our bellies.

So I have made this hunger issue number one on my list ever since the end of the Vietnam War. As long as we were in Vietnam I had an obsession about stopping that foolish war, but after that hunger as it had been before the war, again came to the top of my priority list and it remains there today.

Let me tell you one good thing about the hunger problem. It's solvable. I don't know if we are ever going to solve the problems of war. People have always been killing each other since Cain and Abel, but I think we can end hunger with a reasonable investment of time and energy and money. And so I am optimistic, not in my lifetime, but in yours that we'll end hunger around the world.

We are about one year before the election and when Barack Obama was elected there was tremendous joy around the world and he was compared constantly to Martin Luther King and John F. Kennedy. You know both of them. How does he compare to them and what is your assessment of his record so far?

First of all through no fault of his own he hasn't had much experience in government. He was in the Senate for two years. Jack Kennedy by comparison served first in the House of Representatives for several years then he served in the Senate I think for eight or 10 years. His father was ambassador to the court of St. James (Royal Court of the United Kingdom - the ed.) and Jack was there at the time getting acquainted with the world of diplomats. So he was considerably more experienced than Barack Obama. So was Martin Luther King. Martin King was out in the streets for years and years before he was finally assassinated.

So you have to recognize that we have a young president, young in years and very young in experience. And I think that in his second term which I predict he will have you will find a more alert, a more savvy, a more experienced president. And I believe in his second term and I hope the condition of the country economically will be better in his second term. You never know about these recessions, the Japanese had a long time getting rid of theirs. So I think those are the differences. I certainly hope and pray that he won't fall victim to some crazy assassin as was the case with Martin Luther King and President Kennedy.

Thousands of 'Occupy' protesters took to the streets again this weekend in Germany. Some are permanently camped out in Frankfurt's banking district, despite the onset of winter. (23.10.2011)

In the wake of massive protests across Europe and the world against the financial sector, EU leaders have said they understand the frustration and that greater financial regulation is necessary. (17.10.2011)

Anti-banking protests continue on the streets of Germany

Hundreds of thousands of people have taken to the streets across the world in protest against big banks and corporations. In Germany alone, around 40,000 people demonstrated and the dissatisfaction is growing. (16.10.2011)