Germany′s minimum wage is barely above the poverty line | Business| Economy and finance news from a German perspective | DW | 01.01.2019

Minimum wage should ensure that full-time workers are not poor. Most EU countries that have a minimum wage meet this minimum standard — at least for people living alone. But some, including Germany, cut it awfully close. 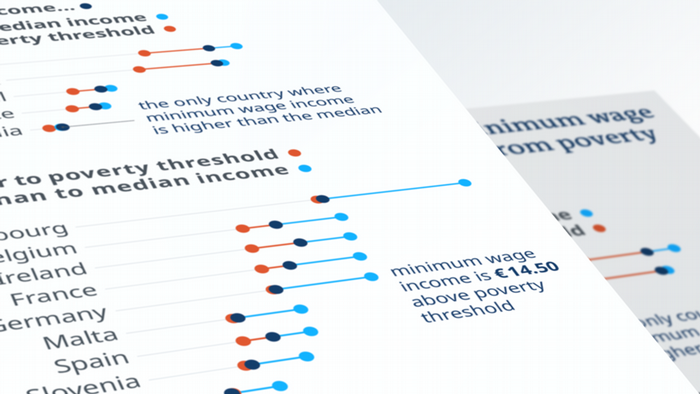 At about €1,500 ($1,700) per month gross for full-time workers, Germany has one of the highest minimum wages in the European Union. And it's rising: As of January 1, employers are required to pay their workers at least €9.19 per hour, a 35-cent raise. Compared with their counterparts in other EU nations, Germany's minimum wage workers seem to do fairly well in sheer numbers. Luxembourg's minimum wage, for instance, may be higher, but Germany's is far closer to the top of the list than it is to the bottom.

DW has analyzed the income that full-time minimum wage workers take home each month in the 22 EU countries that have minimum wage policies in place, using numbers from 2017. Though the data are complicated, the research question was simple: In which countries are workers vulnerable to poverty even though they have full-time jobs?

With the previous minimum wage of €8.84 per hour, a single adult without children in Germany could expect to take home €1,110.50 a month after taxes and social contributions, according to DW's calculations — or about €14.50 above Germany's official poverty threshold. Adults are typically considered vulnerable to poverty by the European Union if they have an income of less than 60 percent of their countries' median income. The median income is the income level that is exceeded by half of the population and not reached by the other half.

This threshold is relative, of course: If you're classified as poor in Germany, you're poor in comparison with people who receive the national median income. Compared with people paid the median income in Romania, though, you still have significantly more money each month. The poverty threshold nevertheless reveals a lot about where minimum wage workers stand: How easily can they participate in activities and maintain the standard of living considered "normal" in their societies? This is why the poverty threshold, despite its drawbacks, is still widely used to craft policy and conduct research on inequality.

The additional 35 cents per hour doesn't bring Germany's minimum wage workers much more above the official poverty level. It amounts to approximately €35 more per month at full-time employment, according to DW's estimates. Minimum wage workers are a long way from the median income. 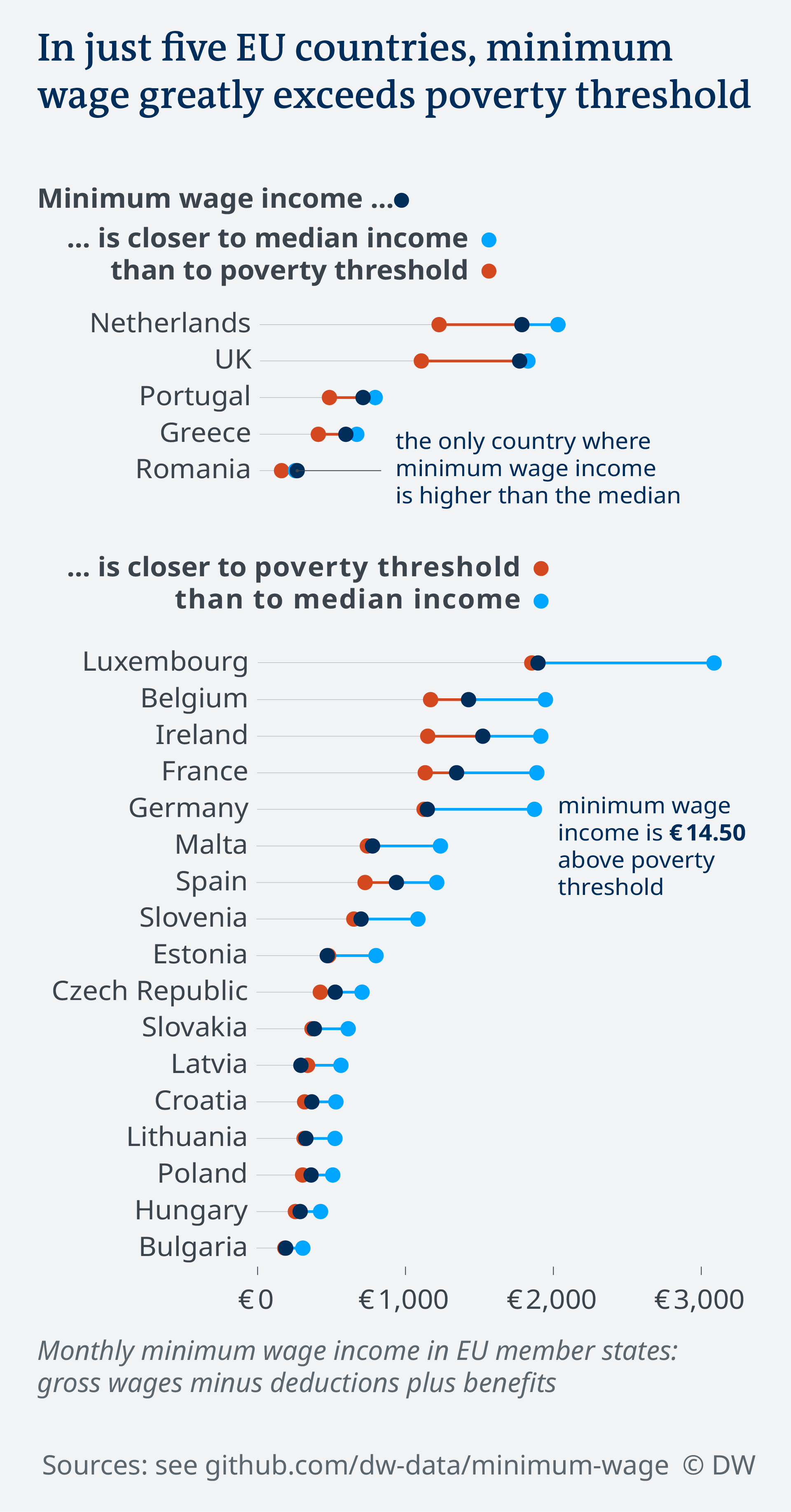 The income level calculated here is for people who live alone, have no children and are employed full time. It is additionally assumed that they would receive all the social assistance they are eligible for. This this is used to calculate their disposable income, which is also the basis for the European Union's calculation of the poverty threshold.

By that metric, Germany is pretty far down the list: It's ahead of only Estonia and Latvia, where minimum wage workers, including those employed full time and living alone, would nevertheless be considered vulnerable to poverty. But, even in Luxembourg, the country with the highest minimum wage in the European Union, workers barely end up above the threshold. 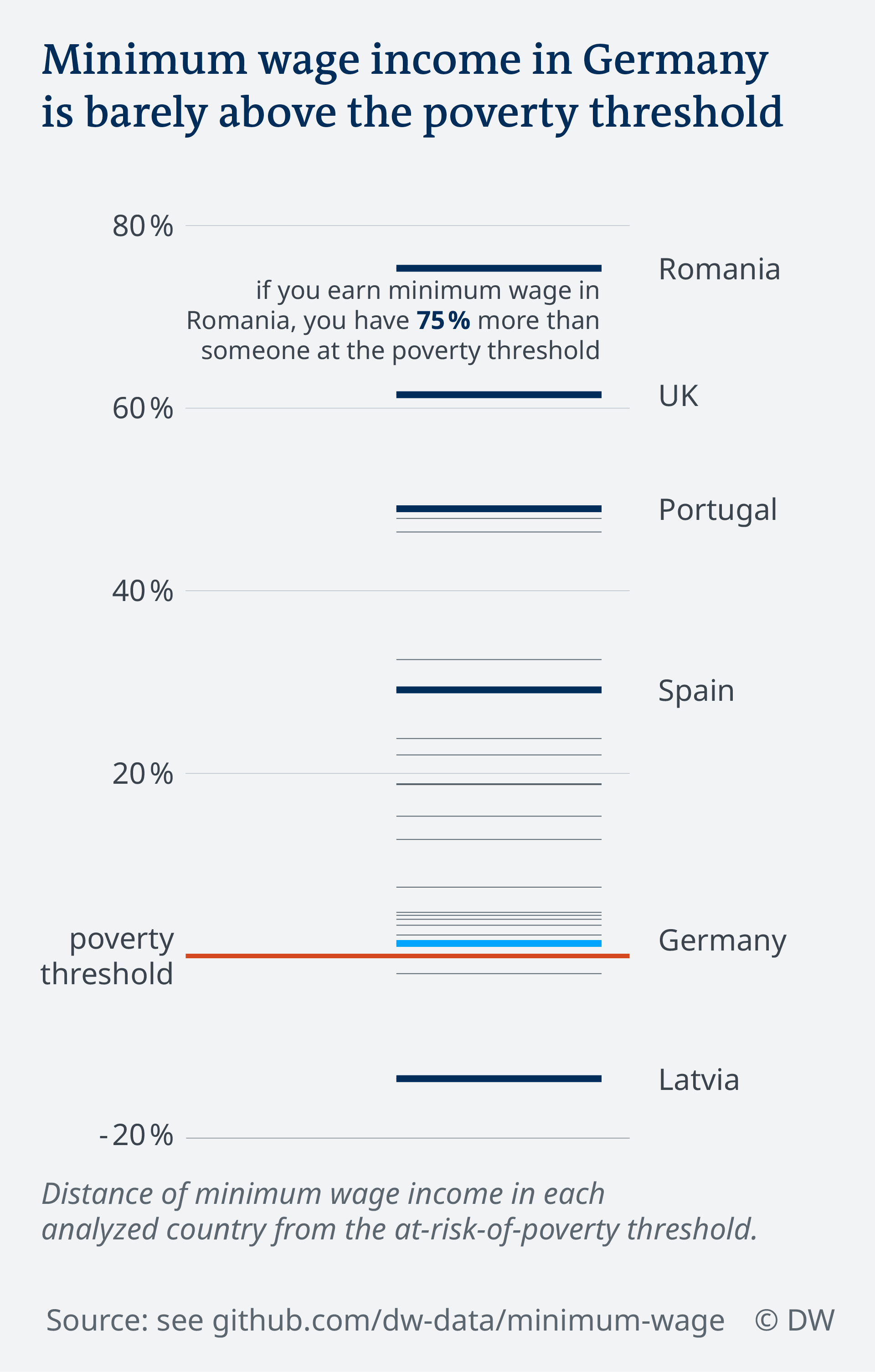 The new top of the list is Romania. The country's poverty threshold for people living alone is just €137 per month. The minimum wage guarantees almost twice as much if you work full time. But one reason why Romania ranks so highly is that overall wages there are pretty low already, said Thorsten Schulten, a political scientist who specializes in international wage and labor policies at the Hans Böckler Foundation in Germany. "In countries with low wages, the minimum wage will be relatively better than in countries with higher wage levels," he said. A similar situation, if not as extreme, can be found in Greece, Portugal and other countries where wages are lower than the EU median. Absolute poverty is still widespread in Romania: According to EU figures, almost a third of the population cannot afford to replace worn-out clothes with new ones.

But some countries with much higher wages do a lot better than Germany does. In the UK, for example, minimum wage income is the equivalent of a whopping €650 per month above the poverty threshold. It is close, in fact, to the median income. This is in large part because of the social assistance that many minimum wage workers can qualify for: Housing, employer-provided benefits and low tax rates can provide workers with the equivalent of €300 a month on top of their gross wages. This is similar in the Netherlands.

In Germany, on the other hand, full-time minimum wage workers who live alone aren't eligible for assistance, but they are obliged to pay comparatively high social contributions: These alone take about €300 out of their monthly pay. This is a problem for low-wage workers, said Barbara Binder, who researches income inequality at the Karlsruhe Institute of Technology (KIT). "Social contributions in Germany are high starting from a very low income," she said. "It's interesting to see how differently European countries assess the extent of support that people on the minimum wage should have access to."

Even without government assistance, minimum wage workers in the UK and the Netherlands would still earn about 30 percent more than someone at the poverty threshold. In the UK, this might be in part thanks to the power of the living wage campaign, which has driven the discussion around the minimum wage in the country for years. The Living Wage Foundation works with businesses and politicians to arrive at a wage calculated based on the cost of living. The system currently in place, however, is tied to the relation of the minimum wage to median wages in the country, as it is in many EU countries. In April, the official minimum wage for most workers aged 25 and older in the United Kingdom will be raised to 8.21 pounds (€9.10/$10.35) per hour. According to the foundation, 9 pounds per hour would constitute an adequate minimum wage. But the organization has managed to influence policy nonetheless: After raising the minimum wage in 2016, Britain's government has even adopted the group's language, officially calling its policy the National Living Wage.

Who is paid the minimum wage?

There is surprisingly little information on who receives the minimum wage and what standard of living it can guarantee. "Even in research papers, this is often mentioned as curious," Binder said. What is known is that, in general, women, younger workers, people with disabilities, members of minority groups and lower-skilled workers are all more likely to be paid less. In Germany, 60 percent of minimum wage workers are women.

For part-time employees, living on the minimum wage is much more difficult. In Germany, almost 50 percent of people who work for the minimum wage are classified as "minijobbers," employed for a few hours per week for a maximum of €450 per month. For them, and especially for workers with children, the situation is much more difficult. Government figures show that the minimum wage is not nearly enough to meet the cost of living for single parents in Germany, for example. And Germany is not alone: A living net wage for a family of four in Romania would have to be about €710 per month, according to a 2014 survey of garment workers by the Clean Clothes Campaign.

Romania has steeply increased the national minimum wage in recent years. It has more than tripled in the past decade, and, starting January 1, Romanian employees are supposed to receive at least 2,080 Romanian lei (€447/$508) monthly in gross wages. Many workers saw their incomes raised to meet the new minimum.

As a result, Romania now has the highest percentage of minimum wage workers in the EU: According to a Eurofound report, 40 percent of employees in Romania received the minimum wage in 2017. That same year in Germany, just over 3.6 percent of jobs, or 1.4 million total, were performed by workers paid the minimum wage. This might look alarming, but a high percentage of minimum wage recipients is not a bad thing per se. In Romania, at least, it shows that the situation for many employees has improved in recent years.