World leaders have come together virtually to mark the 75th anniversary of the United Nations. German Chancellor Angela Merkel said the organization was in need of greater unity. 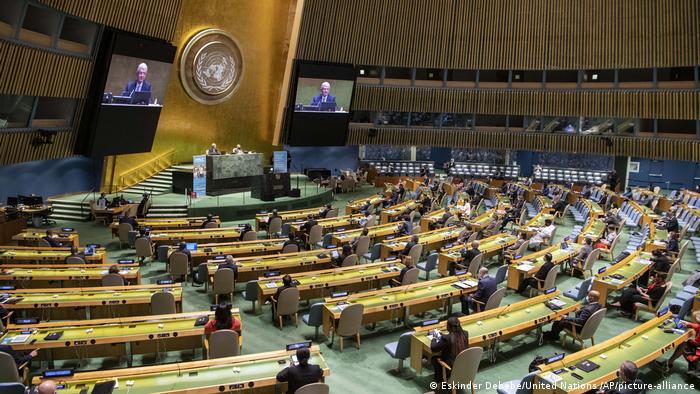 On the occasion of the United Nation's (UN) 75th anniversary, German Chancellor Angela Merkel on Monday called for reforms to the organization and for greater unity between its members.

"In the end, the United Nations can only be as good as its members are united," Merkel said in a video message delivered Monday evening at a ceremony marking the anniversary.

"Too often the UN Security Council is blocked when clear decisions are needed," the chancellor said, referring to the branch of the UN tasked with ensuring international peace and security. "We need reform."

The interests of individual members regularly keep the organization from achieving its goals, Merkel said.

"But anyone who thinks he can get along better on his own is mistaken. Our well-being is shared. And so is our suffering," she said. "We are one world."

The German leader pointed to the global coronavirus pandemic as an example of a problem that crosses national borders. Such problems require "communication and cooperation" at all levels, she said.

Germany is willing to do its part to improve the organization, for example by expanding the UN Security Council, Merkel said, making reference to past suggestions for reforms to the UN's most powerful body.

Cracks in the walls of a 'shared house'

The commemoration began in a muted fashion with a largely online event earlier on Monday.

French President Emmanuel Macron also delivered remarks. "Our shared house is in disorder," he said in his video address. "Its foundations are hollowed out. Its walls are sometimes cracked by the blows of those who built it."

Both Merkel's and Macron's comments seemed to be directed at US President Donald Trump and his "America first" policy. 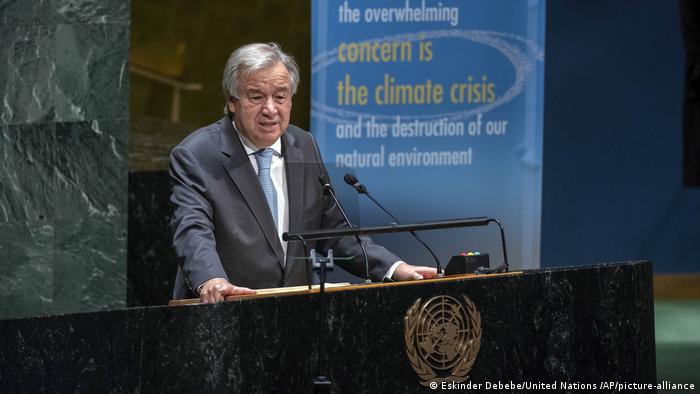 He continued: "Climate calamity looms, biodiversity is collapsing, poverty is again rising, hatred is spreading, geopolitical tensions are escalating... and the COVID-19 pandemic has laid bare the world's fragilities. We can only address them together."

Guterres praised the success of the UN since its foundation in 1945. "A third World War, which so many feared, was avoided. Never in modern history have we been without, for so many years, military confrontation between the great powers," said the UN chief.

The UN was founded amid the ruins of World War II with the principle objective of achieving worldwide peace and world leaders came together, virtually, to mark the 75th anniversary of the organization.

With just a handful of delegates in New York due to the coronavirus, world leaders gave addresses via video links.

Read more:  Africa must be a 'partner' on the global stage, UN deputy chief says The first ever UN General Assembly took place in January 1946, just months after the end of the second World War

US President Donald Trump was slated as the speaker for the first member state to address the Assembly, but the US' acting deputy representative to the UN Cherith Norman Chalet spoke in his stead.

"For the Trump administration," Chalet said, "this anniversary is an important moment to mark the many successes of the United Nations, but to do so with clear eyes and a renewed determination to see this important body serve its intended purpose."

Washington-Beijing tensions, meanwhile, continued to simmer as President Xi launched a thinly veiled swipe at the US in a statement the Chinese mission to the UN submitted on the eve of Monday's event.

"No country has the right to dominate global affairs, control the destiny of others, or keep advantages in development all to itself," the statement said seemingly directed towards the US, who it has previously accused of provocative behavior. "Even less should one be allowed to do whatever it likes and be the hegemon, bully or boss of the world. Unilateralism is a dead end," the statement added.

The strained relations between the two superpowers may well reappear on Tuesday as the annual meeting of the UN General Assembly gets underway on Tuesday.

The UN came into being in October 1945 — soon after Japan's WWII surrender in the Pacific theater — when several countries ratified the United Nations Charter put forth earlier that year. The organization's first formal gathering was its inaugural General Assembly, on January 10, 1946.

Read more: Iran hits back at US 'snapback' sanctions claim