Iran hits back at US 'snapback' sanctions claim

President Rouhani said its arch-rival faces "maximum isolation" after major powers dismissed a US declaration that UN sanctions on Iran were back in force. Washington plans to hit its foe with more penalties on Monday. 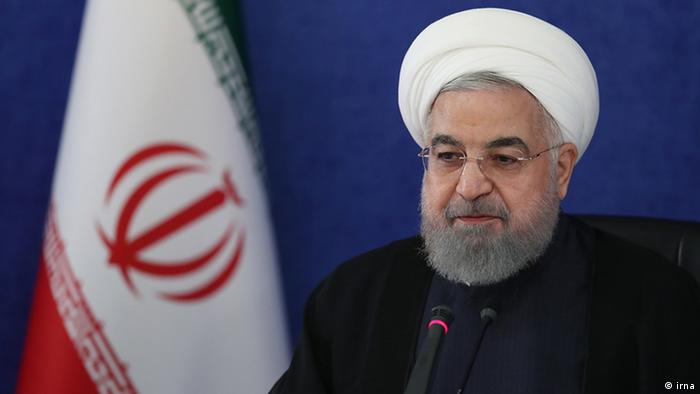 Iranian President Hassan Rouhani on Sunday hit back at US assertions that United Nations sanctions on Tehran were back in force under a "snapback" mechanism.

France, Germany and Britain on Sunday joined Iran in dismissing the assertion.

The US is set to announce penalties on Monday for more than two dozen people and entities involved in Iran's nuclear, missile and conventional arms programs, to back-up the UN sanctions it says are now in place once again.

The push from Washington to sanction Tehran is the latest in a series seeking to stem Iran's atomic program, that US ally Israel views as an existential threat.

What is the snapback mechanism?

The "snapback" mechanism was included in the landmark 2015 nuclear treaty, known as the Joint Comprehensive Plan of Action (JCPOA) signed by the UN Security Council five permanent members Britain, China, France, Russia, the US, as well as Germany and Iran.

Under the deal, the EU and other signatories agreed to lift crippling international sanctions in exchange for Tehran dismantling its atomic program.

According to Washington, the "snapback" mechanism means virtually all UN sanctions took effect again at 8 p.m. on Saturday/0000 UTC on Sunday.

The US announced it was triggering the snapback on August 20, despite having withdrawn from the JCPOA in 2018, with Trump saying the deal was insufficient.

Almost every other Security Council member disputes Washington's ability to execute the snapback.

What did Rouhani say?

"We can say that America's 'maximum pressure' against Iran, in its political and legal aspect, has turned into America's maximum isolation," Iran's president said in a televised cabinet meeting.

Rouhani thanked Security Council members who had "stood against America's illegal request" and said if remaining signatories let Iran access the deal's economic benefits, Iran would reinstate nuclear commitments it had dropped in response to the US withdrawal.

He praised the UNSC's approach to the issue as "very valuable" as it ignored "America's request [and] held no session to consider their request."

How did Security Council members react?

On Sunday, France, Germany and Britain issued a joint statement saying Washington's "purported notification" was "incapable of having any legal effect."

The three countries stressed they remain determined to preserve the nuclear deal with Iran.

Russia said the US lacked legal authority and that its "illegitimate initiative and actions" could not have "international legal consequences" for others.

On Saturday, UN Secretary-General Antonio Guterres told the Security Council he cannot act on the US declaration because it was not clear whether they had snapped back.

US plans more sanctions against Iran

The US maintains that sanctions have been reimposed. US Secretary of State Mike Pompeo said Washington "welcomes the return of virtually all previously terminated UN sanctions on the Islamic Republic of Iran."

The White House now plans to issue an executive order on Monday, sanctioning companies and individuals, to back up the UN sanctions.

Among the targets will be Iran's "most nefarious arms organizations," about a dozen senior officials, scientists and experts from Iran's nuclear complex, members of a procurement network that supplies military-grade dual-use goods for Iran's missile program, and several senior officials involved in Iran's ballistic missile program, reported Reuters, citing an unnamed official.

The State and Treasury departments are expected to outline how foreign individuals and businesses will be penalized for violations.

The US wants to deter foreign companies from dealing with individuals and businesses to be announced on Monday, even if their governments believe this is legally permitted, the official told Reuters.

He was convicted of stabbing to death a security guard during anti-government protests in 2018. Iran had previously promised to crack down hard on demonstrators.

Bahrain has broken up a terrorist plot to attack diplomats and foreign nationals on its soil, local media and Saudi Arabian state TV has claimed. Authorities purportedly found explosives on a street.