Germany's top diplomat has expressed the EU’s opposition to Netanyahu’s plan of annexation. Heiko Maas is the first high-ranking official to visit Israel since the new government was sworn in last month. 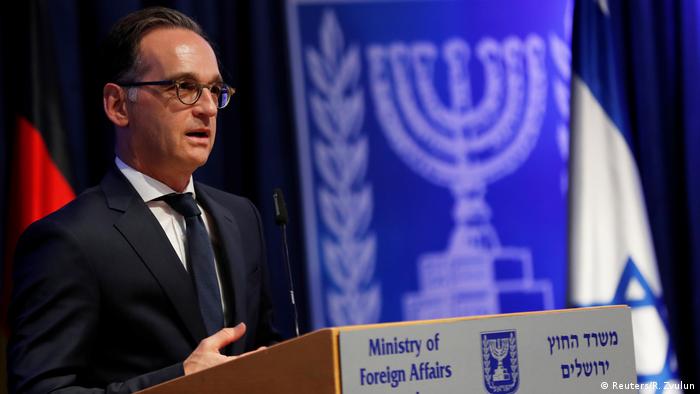 The annexation of Jewish settlements and the Jordan Valley is part of US President Donald Trump's Middle East plan, with a separate, reduced-in-size Palestinian state.

This peace plan involves annexation of Israeli settlements, and it has been rejected by Palestine. Palestinians had submitted an alternate plan to the diplomatic quartet, comprising of the US, UN, Russia and the EU.

Speaking at a news conference, Maas said Germany and the European Union would "seek dialogue" with Israel.

But he made clear that Europe considers annexation incompatible with international law.

"Many people in Israel — and also in the European Union — are preoccupied with the current developments in the Middle East peace process and the possible annexation plans,'' Maas said prior to his departure. "Germany remains committed to the goal of a negotiated two-state solution."

The minister added that the purpose of his visit was to learn more about Israel's plans.

Palestinian Prime Minister Mohammad Shtayyeh on Tuesday said Palestine would declare statehood over the entire West Bank and Gaza if Israel went ahead with this plan. He called this possible action an "existential threat” to international effort for Israel and Palestine to reach an agreement over two neighboring states.

Maas is the first high-ranking official to visit Israel since the country's new coalition government was sworn-in on May 17.

Read more: Jerusalem — An eerily different Easter in the time of coronavirus

Palestinian PM Shtayyeh said, "We know the history of the legacy of German-Jewish relations. We know how sensitive this issue is. But this should not come at the expense of Palestinian rights."

Yesterday, Israel's top court struck down a law that would have allowed the government to seize hundreds of hectares of occupied land in the West Bank. This action was taken after Israeli and Palestinian rights groups asked the court to examine the validity of this law.

Germany will be taking charge of the EU's rotating presidency from July 1. This means the nation will play an important role in determining whether to sanction Israel for its actions. The EU has not announced any measures to retaliate against Israel's actions. Sanctions would require the approval of all 27 member states.

July 1 is also when Netanyahu plans to bring annexation proposals to the cabinet or parliament.

Maas is also scheduled to meet Israel's Foreign Minister Gabi Ashkenazi and Defence Minister Benny Gantz. He is also expected to conduct a video call with the Palestinian Prime Minister. The German Foreign Office cited the coronavirus pandemic as the reason for Maas not visiting Ramallah, where the Palestinian state resides.