Hazardous substances have no business on ocean liners, the German Green party has said after a cargo ship lost 270 containers in the North Sea. But shipping experts have put the blame on the sheer size of new vessels. 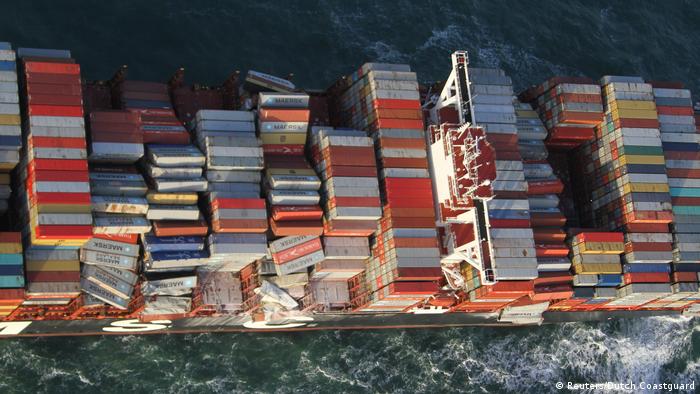 German environmental organizations and politicians are calling for shipping containers on cargo vessels to be fitted with tracking devices, in response to an accident that caused a huge vessel to spill around 270 containers in the North Sea earlier this week.

"The problem is locating the containers," said Olaf Lies, environment minister for the state of Lower Saxony, off whose coast the accident happened. Speaking with the local ffn radio station, he demanded an investigation. "We urgently need to do something," he said.

That sentiment was echoed by Manfred Santen, a Greenpeace expert for chemical pollutants, who told broadcaster NDR that it was "no problem technically" to install trackers. Lies also suggested that containers carrying hazardous materials should no longer be stored near the edges or tops of cargo vessels.

The Panamanian-flagged MSC Zoe lost its 270 containers during a storm in the North Sea on Tuesday night, as it was travelling from Antwerp in Belgium to Bremerhaven on the German coast.

Read more: How to protect the high seas environment?

At least three of the lost containers are thought to contain dangerous chemicals, and a 25-kilo (55-pound) bag of highly flammable organic peroxide powder has already been recovered from the island of Schiermonnikoog off the Dutch north coast, according to the Agence France-Presse news agency.

Even before Tuesday's accident, Germany's environmentalist Green party had demanded that such substances be banned from the high seas. "Dangerous chemicals have no business on the world's oceans," Green party spokesman Oliver Krischer told DW in an email. "Especially not in the top row of cargo ships, where they can quickly go overboard.

"Limitations, especially for the North Sea and for European ports, should be introduced as soon as possible," he added. "The risk of larger accidents is intolerable."

Dutch authorities have reported that around 20 of the containers have washed up on the shores of the country's North Sea islands, with their contents scattered across the beaches. Local volunteers had collected some 130 tons of goods scattered along 5 kilometers (3.1 miles) of the coast of the island of Ameland alone.

But Uwe Schmidt, a Bundestag member with the center-left Social Democrats and an expert on cargo shipping, questioned the wisdom of the measures demanded by the Green party and Olaf Lies, his party colleague.

Schmidt, who is originally from Bremerhaven, told the Deutschlandfunk radio station that containers with hazardous contents had to be packed on the outside of ships, making them easily accessible in case of fire. He also wondered about the practicality of tracking transponders, given that modern recovery technology, which is equipped with sonar, is already very effective.

Schmidt added that the new generation of supersized ocean freighters, of which the MSC Zoe was an example, had made securing the containers on board much more difficult. "Stacking eight containers on top of each on deck was completely impossible until 10  years ago," Schmidt said. "Of course, that makes the ships significantly more complicated than before, when it comes to stability, and when it comes to securing the load."

He also pointed out that safety on international cargo shipping was practically "self-regulated" through the International Maritime Organization. "I do think that in the future that we will [need] more specialized regulations for individual ship types," he said.

At Friday's regular government press conference in Berlin, Environment Ministry spokesperson Nikolai Fichtner would only say it was "too early" to draw any "political consequences" from the incident.

While diesel cars increasingly look to be on the way out, another big polluter is often ignored: shipping. Will electric vessels, including the first e-barges, help the industry clean up its act? (20.03.2018)

Experts say a German tanker that sank in the Baltic Sea at the end of World War II will sooner or later cause an environmental catastrophe. But getting authorities to take action is proving difficult. (24.09.2018)