German WWII wreck poses threat of eco-disaster in Poland | Europe | News and current affairs from around the continent | DW | 24.09.2018

Experts say a German tanker that sank in the Baltic Sea at the end of World War II will sooner or later cause an environmental catastrophe. But getting authorities to take action is proving difficult. 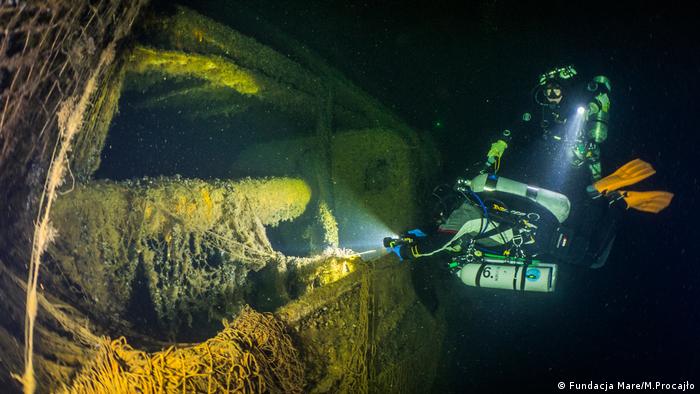 The Franken was a floating gas station. The ship supplied the German navy operating in the Baltic Sea with fuel during World War Two. The tanker had a capacity of up to 10,000 tons (11,000 US tons) of fuel. Hit by Russian torpedoes, it sank near the Hel Peninsula off Gdansk on April 8, 1945, some its tanks still well-filled.

After the war, international law of the day stipulated that the wreck was now Polish property. At the time, recovering the Franken was unprofitable. "It just sat there and wasn't in anyone's way," says Benedykt Hac of the Maritime Institute in Gdansk.

But that has now changed, Hac, an experienced navigator and captain, says. The question is not whether a disaster will happen, but when, he warns.

According to the most recent report on the tanker's condition, there are still 3,136 m³ (828,444 liquid gallons) of fuel on board. A significant amount, about 60 percent of the ship's cargo, was lost during the attack, but there is still a lot left, says Hac. Thanks to "good German engineering," he says, some of the tanks are still intact. 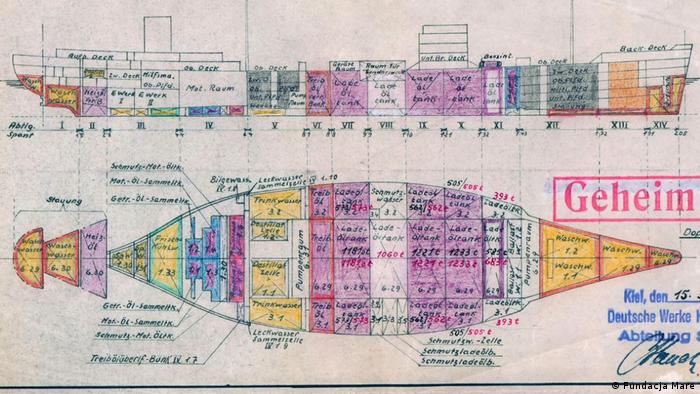 Several of the fuel tanks, shown here in pink, are still full

But even the best engineering can't change the laws of physics. The salt water is causing the steel of the tanks to corrode at a rate of 1 millimeter (0.039 inch) per decade. Over the past seven decades, 7 of the 12 millimeters of the tank walls may very well have vanished. If the hull corrodes even further, the wreck could collapse under its own weight, which could trigger an uncontrolled leak, Hac asserts — with dramatic consequences for the environment.

To make things worse, the Baltic Sea is an inland sea that is currently experiencing an unusually slow exchange of water with the neighboring North Sea. "As a scientist, I can't remain silent," Hac says.

Hac and his team unsuccessfully sought help in the matter for years. The cost of salvaging the fuel load is estimated at between €8 million ($9.4 million) and €20 million, which includes insurance and ordnance disposal. Poland's Mare foundation launched an information campaign, and theGerman  Baltic Sea Conservation Foundation (Baltcf) sponsored a pilot project to raise public awareness of the eco-threat. However, funds covered only the examination of the wreck from the outside and the development of methods and guidelines for the recovery of the hazardous materials on board and of standard procedures and implementation strategies for the authorities.

There's no time to lose, says Baltcf Managing Director Peter Torkler, adding that in view of the dynamic economic development in Gdansk Bay and the advancement of tourism in the area, it should be regarded as an "extremely important project."

In February of this year, the Baltcf decided to help with the Polish project, and on April 23, 2018, two Polish research ships from the Baltic Sea dive base, the IMOR and the LITORAL, joined in. Divers spent about 60 hours under water, 13 of them on the wreck. An information campaign was launched and an online petition to the Polish government to clean the Franken's tanks was posted by the Mare foundation, with more than 45,000 people signing so far.

"We're not out to condemn anyone, but are trying to mobilize people to save the ecosystem of Gdansk Bay," says Olga Sarna, president of the board of the Mare foundation.

It's also about "breaking the silence," adds Peter Torkler, pointing out the Gdansk Marine Institute's unsuccessful attempts to gain the interest of authorities.

However, in July, the Polish shipping minister, Marek Grobarczyk, at least set up a special team to solve the problems caused by the Franken, and the environmental activists are hoping, with his ministry's backing, to receive EU emergency financing for the salvage operation. 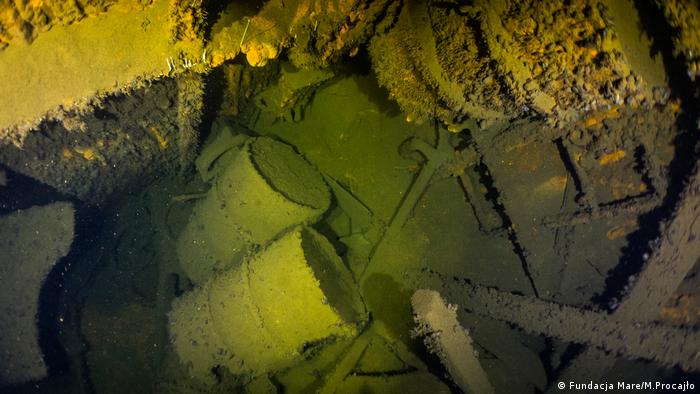 The Franken is a disaster waiting to happen, experts say

German authorities, for their part, have been guarded in their response to the Franken case.

The wreck is in Polish waters, says Carolin Zerger from the Ministry for the Environment, Nature Conservation and Nuclear Safety (BMU). She has suggested that Poland contact the expert group "SUBMERGED" from the Helsinki-based marine protection commission HELCOM, which assesses the environmental risks of hazardous objects submerged in the Baltic Sea.

Peter Torkler is not surprised at the German authorities' attitude.

"Nobody wants to set a precedent," he says. "Wrecks are a huge problem because there are thousands of them. This is something people don't like to talk about in public."

All the same, at an event in May, Germany's Federal Foreign Office International Club (ICAA), an association of current and former German diplomats, put the issue on their agenda.

Peter Torkler believes that is a good sign. "After we saw how well the campaign is doing in Poland, we are now wondering what forums and institutions might take on the project in Germany," he says.

It may be a major enterprise, Torkler says, but he is confident that "if everyone affected by this problem works together, we can achieve a lot together with Germany and Poland."