The Free Democrats touted its education policy with an ad on Twitter that featured a man fixing mispelled far left and right slogans. Critics slammed FDP for being tone deaf and trivializing Nazi slogans. 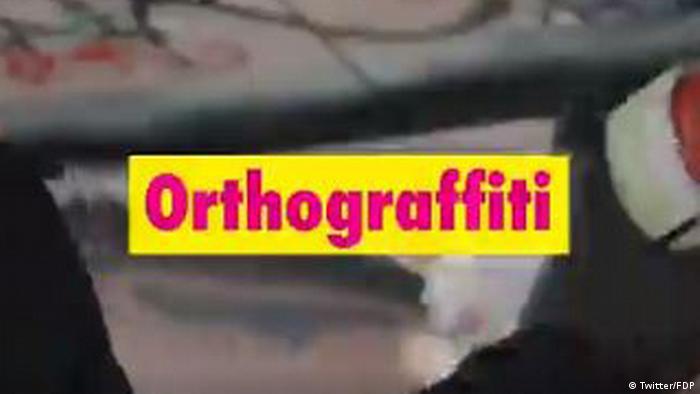 Germany's Free Democrats (FDP) were criticized on social media on Thursday for an advertisement that featured a salute used by the Nazis "Sieg Heil" (hail to victory) as part of a video intended to highlight their education policies.

The ad, pegged to the hashtag #Orthograffiti, features a man with a blurred face going around a city fixing the spelling of various graffiti slogans.

The video featured phrases from the far left, such as "f**k the police" and "anarchy," and slogans from the far-right that denigrate refugees, such as the English phrase "refugees not welcome."

But the ad also included the controversial slogan "Sieg Heil,” which in the video is misspelled as "Sieg Hail."

"The more crude political debates in the country become, the clearer it becomes for us Liberals: Education has never been more important as it is today. That is why we champion this #Orthograffiti campaign, for a better education policy," the Tweet read.

At the end of the video, FDP elaborated on the message, saying "Education is the answer. This not only applies to spelling, but also against extremism, vandalism and violence. With good education, we also want to ensure, as the film shows, that we finally vanish misanthropic graffiti from our cities."

Hours after the video was posted, it became the number one trending topic on Twitter in Germany and received thousands of comments. Most of the comments were critical, denouncing what they saw as the ad's trivialization of Nazi and far-right language.

The backlash to the ad comes just two weeks after a man in the city of Halle killed two people outside a synagogue in an anti-Semitic rampage. The attack led to a wider discussion among politicians and the media over the specter of far-right nationalism and rising anti-Semitism in the country.

German Jewish Comedian Shahak Shapira hit back at the ironic ad with his own irony. "Even if Germany lurches back into a genocidal rightwing dictatorship, the courageous @FDP will at least make sure that we all spell 'Sieg Heil' correctly," Shapira wrote.

ZDF broadcaster TV moderator Dunja Hayali went as far as saying the phrase should disappear. "Could we democrats continue to make sure that 'Sieg Heil' finally disappears from our minds! Then no one would have to know how to spell it right anymore," she wrote.

Extra 3, a political comedy show, responded to the FDP with a video of an elderly woman known for going around her city defacing far-right and Nazi symbols on the street.

But the Liberals defended their ad on Twitter, saying the video was meant to be ironic and reinforcing the notion that the party was against far-right symbols, while insisting that education was still the answer to the critic's complaints.

As of this summer, the FDP had drawn 8% of potential voters, coming in behind the Greens, Angela Merkel's CDU, the far-right AfD and the Social Democrats (SPD).

The Liberals have campaigned as a rightwing alternative to both the far-right and the center-right, focusing on lowering taxes and greater EU integration.  But they have also been against open borders and advocating for an "orderly system" that favors skilled migration.

The federal government and its agencies used more than 1.2 billion pieces of paper in 2017. Germany is becoming increasingly notorious in Europe for lagging on digital infrastructure. (22.01.2019)

Over half of the 24,000 far-right extremists in Germany are potentially violent, the Interior Ministry has said. The opposition FDP wants extremists tracked where they communicate: in online game platforms. (03.05.2019)