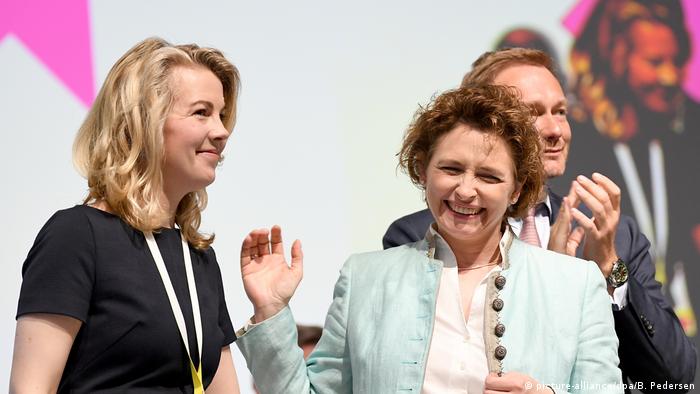 Germany's Free Democratic Party (FDP) reaffirmed its support for voluntary instead of mandatory reform as they wound up their Berlin conference on Sunday, arguing over how to attract women members as well as how to critique Germany's climate policy and soaring home rental prices.

Delegate Julika Sandt from the FDP's Bavaria branch warned the party's re-juggled leadership, including media-omnipresent chairman Christian Lindner, that the party "could not afford to be perceived as a men's club."

With only one-in-five of the party's 65,000 members female, delegates concluded debate on Sunday by adopting a resolution saying women should be elevated into party executive positions via "target agreements" set by party organs not quotas.

On Friday, nearly 87% of the party's 600 delegates re-elected Lindner, who led the FDP's electoral comeback in late 2017 but then dropped a likely three-way coalition with Chancellor Angela Merkel's conservatives and Greens, as chairman.

Eclipsing him was a new figurehead: Linda Teuteberg, a 38-year-old jurist-turned-federal parliamentarian specializing in German interior affairs. More than 90% of delegates voted for her to replace Nicola Beer as the party's general secretary.

Beer, who recasts in her new role as the FDP's leading contestant in Germany for the May 26 European Parliament elections, also landed an additional post as one of three FDP deputy chairpersons thanks to previous deputy chair Marie-Agnes Strack-Zimmermann not seeking re-election. The vote share for Beer was a bruising 58.5%.

As general secretary, Teuteberg will have the task of organizing the FDP's campaigns for September elections in her home regional state of Brandenburg, which encircles Berlin, and Saxony, followed by a regional vote in Thuringia in October.

The FDP is absent from regional assemblies in all three states, where voter surveys show the far-right AfD making gains following Germany's 2015 asylum-seeker influx. The FDP's fortunes there have been in contrast to coalition roles held mainly in states belonging to former West Germany.

And, in the federal Bundestag parliament, the FDP competes alongside three other opposition parties — the socialist Left party, the far-right AfD and the resurgent Green Party, which is polling nationwide at about double the FDP's 9%.

The FDP's return to the federal parliament in 2017 followed its failure to clear the 5% hurdle in 2013, a result that came after it had served in parliament for 64 straight years, including in coalitions with the center-left Social Democrats (SPD) and Chancellor Angela Merkel's conservatives (CDU/CSU).

Lindner on Friday risked more youth rebuke over his recent cold-shouldering of Fridays-for-Future protestors by telling delegates that anyone, including young people, could formulate climate goals, but professionals and industry were needed to implement innovative technologies to mitigate climate change. 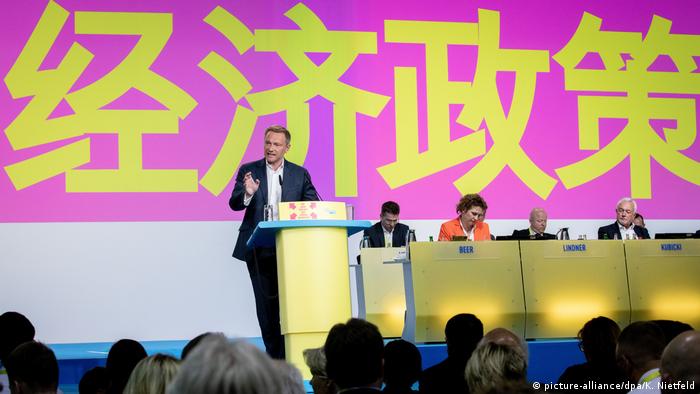 Lindner held parts of his speech in Chinese

Alluding to the Greens and their high-profile co-leader, Robert Habeck, Lindner warned against "ecological authoritarianism."

"We will all end up vegetarians and vegans, if we leave it up to them," Lindner opined.

Germany's "highly ambitious" climate rescue goals had pushed energy costs "through the ceiling," Kempf told the Frankfurter Allgemeinen Sonntagszeitung newspaper three weeks ago, adding that electricity costs for businesses were the third-highest in the world.

The FDP's Lindner, inserting Chinese phrases into his speech and conference decor, and alluding to Altmaier's attendance at China's "Belt and Road" conference, said Germany and Europe must meet China at "eye level."

Lindner helped the FDP return to Germany's lower house of parliament, the Bundestag, in the 2017 elections. But he turned down an opportunity to form a coalition government with Chancellor Angela Merkel after the vote. (27.04.2019)

The chairman of the Free Democrats is determined his party won't repeat old mistakes, but is Christian Lindner making a new one? Meet the man who torpedoed the Jamaica coalition and threw Germany's future wide open. (20.11.2017)

Germany's CDU and CSU kicked off their European election campaign with a demonstrative display of unity. They pledged to fight for European values, stability and peace. (28.04.2019)