AfD in hot water with US museum over campaign billboard

The Berlin chapter of the far-right party recently unveiled a billboard featuring a painting owned by the museum to rail against Muslim immigrants. The Clark Art Institute has called for AfD to stop using the image. 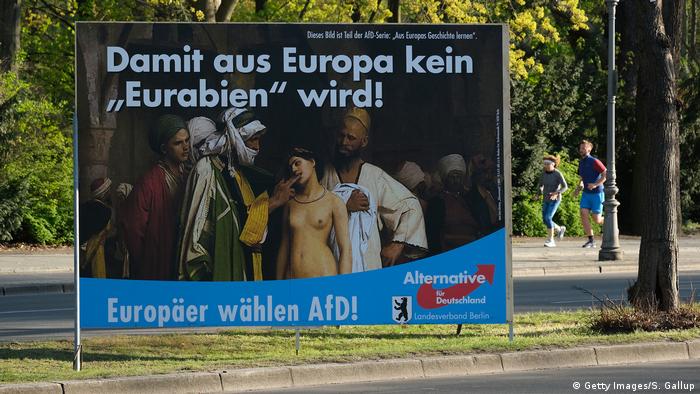 The Clark Art Institute has called for the Berlin chapter of the far-right, anti-immigrant party Alternative for Germany (AfD) to cease using an image of a painting in the museum's collection for political advertising ahead of European elections.

The AfD recently unveiled billboards featuring a cropped portion of the painting "The Slave Market" (1866) by French painter Jean-Leon Gerome, which suggestively depicts several dark-skinned men with beards and turbans inspecting the teeth of a nude white woman.

The poster is emblazoned with the words: "Europeans vote AfD!" and "So Europe doesn't become Eurabia!"

'We strongly condemn the use of the painting'

When the Clark Art Institute learned about the poster via Twitter, its director, Olivier Meslay, immediately released a statement saying: "We strongly condemn the use of the painting to advance AfD's political stance and have written them insisting that they cease and desist from using this painting."

Meslay added: "The Clark institute owns the painting and we are strongly opposed to the use of this work to advance any political agenda. We did not supply this image to the AfD Berlin."

Meslay admitted, however, that since the painting is in the public domain, "there are no copyrights or permissions that allow us to exert control over how it is used other than to appeal to civility on the part of AfD Berlin."

The billboard is part of a larger campaign entitled "Learning from Europe's history," which features a number of historical paintings by artists such as Pieter Brueghel the Elder and Giuseppe Arcimboldo with provocative texts aimed at immigrants, environmentalists and Brussels.