Germany′s car scrapping scheme may have backfired | World | Breaking news and perspectives from around the globe | DW | 24.08.2009

The German government has decided not to renew its car scrapping scheme, citing costs. Yet there are also concerns that instead of being crushed here, many cars are being illegally shipped to Africa. 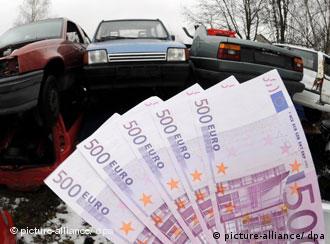 In an effort to stimulate consumer spending, the German government has provided a scrap bonus of 2,500 euros ($3,570) for two million old cars this year. On Monday, Germany announced it would not extend the subsidy, which has proved extremely popular.

Many Germans jumped at the chance to replace old cars with new ones. But instead of being crushed here, as planned by the program, many cars end up in Africa.

The German police association Bund Deutscher Kriminalbeamter (BDK) has been bombarded with press interview requests ever since it estimated earlier this month that since January at least 50,000 cars have been exported illegally, after their owners had been granted the scrap bonus.

For his calculation BDK Vice-Chairman Wilfried Albishausen, who spent part of his career fighting organized crime, adapted criteria which are generaly used for estimating drug trafficking.

"The risk of being caught is extremely low, as there is hardly any control," he told Deutsche Welle. "When someone is caught, punishment remains minimal. Thirdly there is a market for old cars in Africa and eastern Europe. And the German scrap industry is in a bad shape and therefore more willing to ignore the law."

Gottfried Hoell, chairman of the association for the German scrap industry, confirms what the police inspector assumes: 80 percent of the 1,400 officially registered scrappers, Hoell says, he trusts blindly. That leaves almost 300 whom he cannot trust.

Hoell understands the wrongdoers: "When a car scrapper has financial problems because of the bonus - because he is getting too many cars and has to rent extra space for them and at the same time sells less spare parts for old cars because the cars are no longer there - then of course when he gets an attractive offer in such a situation, he will not say no," he said. 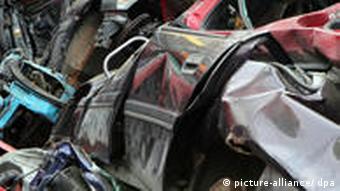 Thousands of cars have not ended up being scrapped

During a recent visit to a scrap company in central Germany, Hoell met an interested African on the premises, who was willing to pay up to 2,500 euros for any bonus car.

That story doesn't surprise a Nigerian shipping agent based in the Rhineland. The man, who asked to remain anonymous, said he exports up to 150 cars a month to West Africa. He is not involved in illegal business himself, he said. But he hears stories of exporters taking old cars apart before packing them in containers. Once they reach their destination, they are put together again.

If two million German old cars are shredded, one would expect a lack of used cars. German used-car dealers confirm that their business this year sank to barely 20 percent of last year's turnover. But in an interview with German national radio Deutschlandfunk, a dealer in Cotonou, West Africa's main harbour of car imports in the Republic of Benin, said earlier this month he hadn't noticed any difference.

The Nigerian shipping agent has no problems either. "From my situation I don't think anything changed," he said. "From the business I have not noticed any change." The man exports mainly via Antwerp, where Belgian custom authorities may pay little attention to the German scrap bonus scheme. 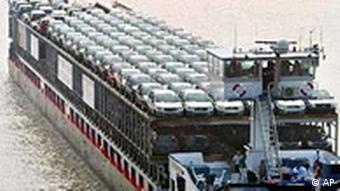 Numerous cases of illegal used-car exports have been reported

But even in German harbours like Hamburg and Bremerhaven customs can do little more than check freight papers, said the BDK's Albishausen. "They just don't have the capacity to open up every single container. But when they check, they often find something. In Hamburg alone they detected nearly 50 cases of illegal used-car exports so far this year."

If the bottom line is that the German government's environmental bonus stimulates the export of old cars, the environment may benefit very little. "With that program five billion euros are going down the drain," said spokeswoman Ulrike Fokken of the Deutsche Umwelthilfe, an environmental organisation in Berlin. "It is an old problem that Germany dumps its garbage in Africa," she added.

Scrapper Gottfried Höll laughs off the environmental justification, even for those cars that are demolished in Germany in line with the scheme. Before they are crushed all the parts can be removed, including the old engine, to live a second life in Europe. Or elsewhere.

Researchers claim that Germany's car scrappage scheme - offering a government cash handout to everyone who trades in an old car for a new model - is wasteful because most claimants would have bought a new car anyway. (03.05.2009)

As US lawmakers discuss the creation of their own system of auto trade-in subsidies, critics of the scheme here in Germany are questioning the motivations of decision-makers in Berlin. (10.04.2009)