On her first official Middle East trip, the German foreign minister has visited a refugee camp in Jordan. She said that, though Germany is the second-biggest donor to the country, it might give more in certain areas. 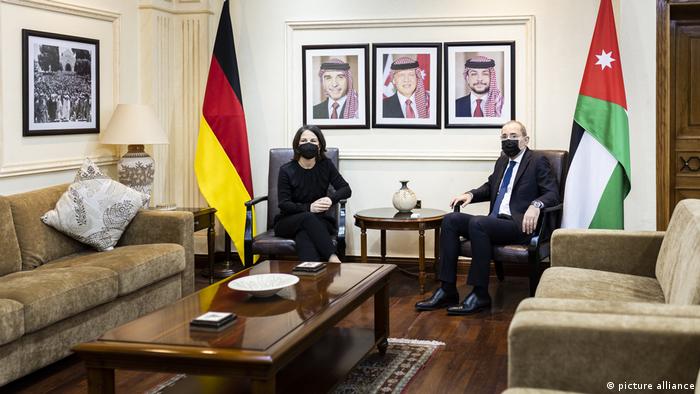 Baerbock has held talks with her Jordanian counterpart, Ayman Safadi

German Foreign Minister Annalena Baerbock on Friday visited the Talbieh refugee settlement near the Jordanian capital and called for an expansion of international aid, particularly to help children there return to school.

Many schools in Jordan have been closed for the past months because of the pandemic, including those at the camp, originally built to house people displaced after the Six-Day War.

The 1967 conflict between Israel and an alliance of Arab states, including Jordan, led to hundreds of thousands of Palestinians' and Syrians' fleeing or being expelled from the West Bank and the Golan Heights, respectively.

What did Baerbock say in Jordan?

During her visit to the camp, Baerbock said it was "important that we not only continue international aid but also expand it, especially within the framework of the United Nations."

Baerbock, who belongs to the environmentalist Green Party, also said she would examine whether Germany could provide more assistance to Jordan with regard to solar power.

"The sun is shining here right now. We see that we actually have a lot of roofs where we could put solar on top," she said.

Later, after talks with Safadi, she spoke about the current confrontation between Russia and Ukraine, saying no attempts at de-escalation by Moscow were evident amid a massive buildup of Russian troops along the border.

Baerbock arrived in Jordan on Thursday evening after a visit to Israel and the Palestinian territories. She is to travel to Egypt for more talks on Saturday.

Jordan's government has closed its border to refugees fleeing the war in southern Syria, instead launching a national aid drive to help those trapped. The policy has drawn harsh criticism on social media.