Germany is hoping to revitalize the Middle East peace process that has laid mostly dormant since 2014. Foreign Minister Baerbock is set to visit Israel, the Palestinian territories, Jordan and Egypt. 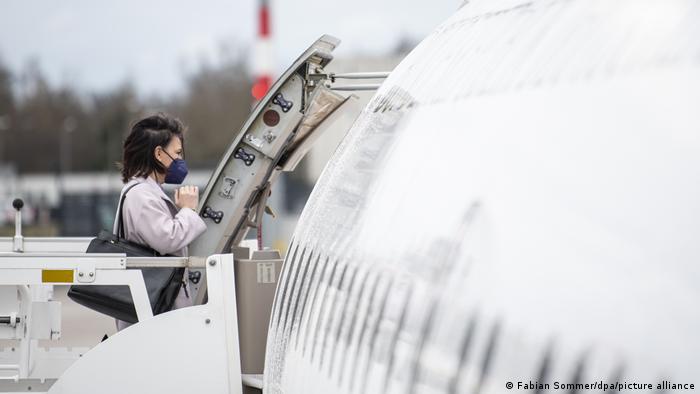 Germany's Foreign Minister Annalena Baerbock was set to begin her tour of the Middle East on Wednesday. She will first head to Israel before visiting the occupied Palestinian territories, Jordan and Egypt.

The aim of the visit is to gather information on the current state of the Middle East peace process. Her trip comes shortly after visiting Ukraine's front line against Russian-backed separatists.

"The new German government is not letting up in its commitment to peace and security for the people in the region. We are convinced that that inseparably includes the protection of human rights," the German foreign minister said in a statement before the trip.

Who will Baerbock meet in Israel?

"Israel is very consciously the first stop on my trip," Baerbock said, highlighting Germany's "special historic responsibility for the safety of Israel."

The agenda includes a visit to the Yad Vashem Holocaust memorial that honors the millions of Jews killed by the Nazis.

The foreign minister is planning to discuss the Middle East peace process at each stop on her trip. "Even if the Middle East conflict seems like a crisis that has always existed for many, we cannot accept it as the status quo," she said.

She also reiterated Germany's support for a "negotiated two-state solution," adding that "for this, there must be a functioning, democratic and sovereign Palestinian state in the future."

As such, she will also visit the Palestinian city of Ramallah in the West Bank and meet with Palestinian President Mahmud Abbas to discuss "the necessary steps in the field of the rule of law or the holding of elections, as well as German support for institutional structures."

What is Baerbock's plan for Jordan and Egypt?

On Thursday evening, Baerbock will travel on to Jordan before then heading to Egypt for talks on Saturday.

"Jordan is a key partner for us — not just as a smart diplomatic intermediary and stability factor, but also because a safe and prosperous Jordan can offer its people a perspective," Baerbock said.

Millions of Palestinian refugees who fled various wars with Israel have settled in Jordan.

Baerbock also described Egypt as an "important contact" in the region due to its proximity not only to Israel and the Palestinian territories but also to Libya.

"In few places in the world do the dangers of the climate crisis for people, nature and the economy and the opportunities for sustainable transformation coincide as much as in the Middle East," the Green party lawmaker said.

With Egypt set to host the next global climate summit, Baerbock said she will suggest to her Egyptian counterpart that they work together to set up the St Petersburg climate dialogue in July.