German Chancellor Angela Merkel has urged Iran to recount the votes in its disputed presidential election and to permit free reporting of the developing situation in the country. 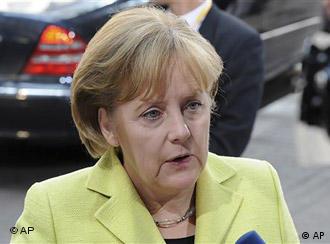 World leaders are concerned over continued unrest in Iran

"Germany is on the side of the people of Iran who want to exercise their right to freedom of expression and free assembly," Merkel said in a statement on Sunday.

The German chancellor also called on the leadership in Iran to permit peaceful demonstrations, refrain from using force against protestors and release imprisoned opposition figures.

Merkel demanded that restrictions placed on foreign media in covering the widespread protests across Tehran and the rest of the country be lifted.

"Human and civil rights have to be fully respected," she said.

Foreign Minister Frank-Walter Steinmeier, who is also Germany's vice chancellor, issued a separate statement urging "all political forces to defuse the situation that has developed, otherwise the situation threatens to escalate further."´ 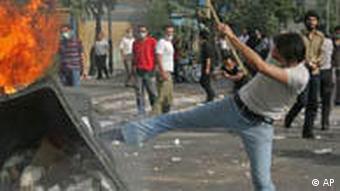 Rallies have become violent, as have police crackdowns

Steinmeier called for a swift end to the dispute over the results of the vote.

"That includes systematically clearing up doubts about the proceedings and outcome of the election," he said.

World leaders have voiced mounting concern over the unrest in Tehran. Iran's state media reported at least 10 people were killed when police clashed with demonstrators in the capital on Saturday.

US President Barack Obama, who has been trying to mend ties with Iran since taking office in January, has urged Tehran to "stop all violent and unjust actions against its own people."

"The Iranian government must understand that the world is watching," he added.

British Foreign Secretary David Miliband released a statement saying he rejected "categorically the idea that the protestors in Iran are manipulated or motivated by foreign countries."

News organization the BBC has confirmed that its correspondent in Iran has been asked by the Iranian authorities to leave the country amid accusations he has been supporting post-election violence.

Italian Foreign Minister Franco Frattini said his country was "worried" by the loss of life in Iran. 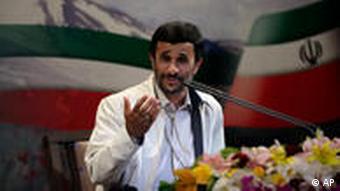 Ahmadinejad has dismissed the unrest in Tehran

Meanwhile, the leadership in Tehran has fired back at critics in the West, accusing foreign governments of meddling in its affairs. President Mahmoud Ahmadinejad on Sunday told the US and Britain to "stop interfering."

"By making hasty comments, you will not have a place in the circle of the Iranian nation's friends. Therefore, I recommend you correct your interfering positions," Ahmadinejad said in a statement.

On Friday, Supreme Leader Ayatollah Ali Khamenei attacked what he called interference by foreign powers who had questioned the election results, saying Iran's enemies were trying to undermine the legitimacy of its Islamic establishment.

Ahmadinejad was declared winner of the presidential polls with more than 60 percent of the vote, but opposition leader Mir Hossein Mousavi has alleged fraud and called for a new ballot.

A Canadian reporter has been taken into custody without charge by Iranian authorities. As unrest continues following recent presidential elections, Iran continues to clamp down on foreign correspondents. (22.06.2009)

In several cities across Germany and Europe, thousands of Iranian exiles have taken to the streets to denounce the government in Tehran and last week's disputed presidential election. (21.06.2009)