Mousavi issues unprecedented criticism of Khamenei as Iran unrest grows | World| Breaking news and perspectives from around the globe | DW | 21.06.2009 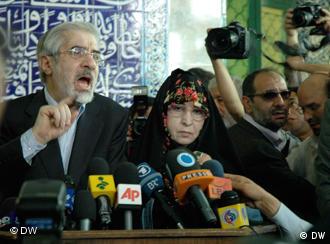 Mousavi's tone hardens as Iran is thrown deeper into turmoil

Mousavi, who has led a massive wave of public opposition to the disputed June 12 vote that returned hardliner Mahmoud Ahmadinejad to power, accused the country's rulers of "cheating" and warned of a dangerous path ahead if the crackdown on demonstrators continued.

"If this huge volume of cheating and changing the votes... which has hurt people's trust, is presented as the very evidence of the lack of cheating, then it will butcher the republican aspect of the system, and the idea that Islam is incompatible with a republic will be proven," Mousavi said.

Supreme Leader Ayatollah Ali Khamenei, who last week ordered a probe into allegations of electoral fraud, had insisted in his Friday sermon that the margin of Ahmadinejad's victory over Mousavi meant there had been no cheating.

Iran's electoral watchdog, the 12-member Guardians Council, said on Saturday it was ready to randomly recount up to 10 percent of the ballot boxes from the election, state television reported.

Opposition leader calls for purging of the republic 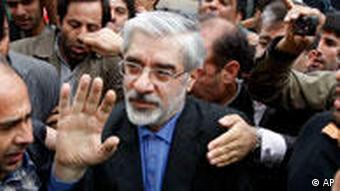 Mousavi added that the Islamic Republic must be purged of what he called lies and dishonesty, sending out a direct challenge to conservative rulers after a week of unrest in Iran.

The opposition leader, who claims victory in the poll, told supporters he was "ready for martyrdom", according to an ally. But he said he did not seek confrontation with the authorities.

"We are not against the Islamic system and its laws but against lies and deviations and just want to reform it," he said in a statement on his website at the end of another tumultuous day.

Mousavi said if authorities refused to allow peaceful protests they would face the "consequences" – an apparent rejoinder to Khamenei's warning that opposition leaders would be held responsible for any bloodshed resulting from protests.

"The people expect from their officials honesty and decency as many of our problems are because of lies ... The Islamic revolution should be the way it was and the way it should be," Mousavi said. "If the people's trust is not matched by protecting their votes, or if they are not able to defend their rights in a civil peaceful reaction, there will be dangerous ways ahead."

Riot police out in force as protests turn violent 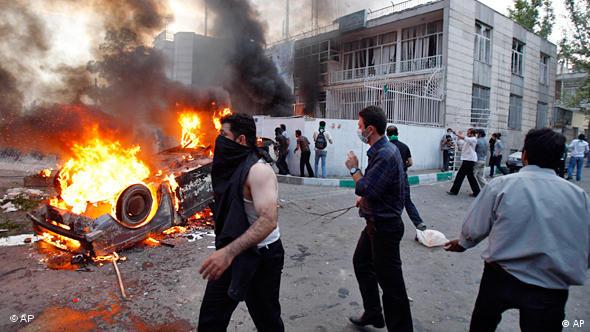 Mousavi's statements came after police firing tear gas and water canons clashed with thousands of protestors who defied an ultimatum from Ayatollah Ali Khamenei for an end to their street protests.

At least one person was wounded when shots rang out during Saturday's rally as demonstrators faced off against hundreds of security personnel to assemble in Enghelab (Revolution) Square in the heart of the capital, witnesses said.

Helicopters criss-crossed Tehran and ambulance sirens wailed into the night after streets emptied of protesters who had defied Friday's stern warning from Khamenei during his weekly prayers.

The head of Iran's Security Council, Abbas Mohtaj, on Saturday delivered a specific warning to Mousavi and his supporters.

"Your national duty tells you to refrain from provoking illegal gatherings," Mohtaj said in a statement. "Should you provoke and call for these illegal rallies you will be responsible for the consequences."

Since the protests began, scores of prominent political activists, including reformist leaders and former government officials, have also been rounded up by the authorities.

In several cities across Germany and Europe, thousands of Iranian exiles have taken to the streets to denounce the government in Tehran and last week's disputed presidential election. (21.06.2009)

Despite censorship in post-election Iran eyewitnesses describe an increasingly tense standoff between authorities and opposition protestors. (20.06.2009)