German car makers "gambled away" public trust by manipulating emissions values in their diesel cars, Chancellor Angela Merkel said in a Dortmund campaign speech. She added that honesty is part of the economy. 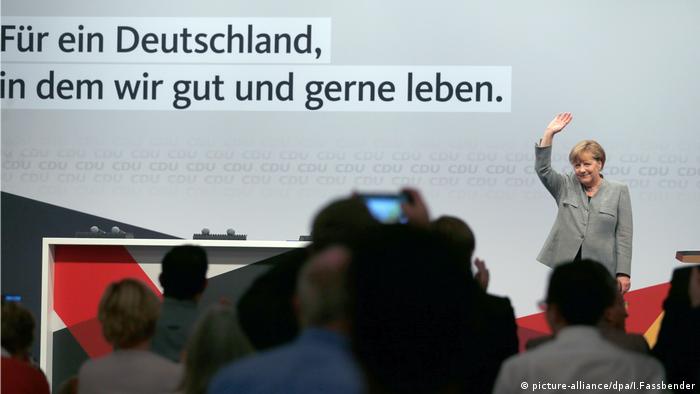 CDU's slogan translates to: "For a Germany where life is good and we enjoy it"

Chancellor Angela Merkel addressed supporters of her conservative Christian Democratic Union (CDU) party at a Saturday event in the industrial city of Dortmund, joining the final stage of the campaign for the parliamentary election on September 24.

"Large sections of the automobile industry have gambled away huge amount of [public] trust," Merkel said in Dortmund. "When I say 'industry' I mean first and foremost 'the companies' management'," she added.

Germany's carmaking giants such as Volkswagen, Daimler AG, and BMW, employ some 800,000 people in the country. The carmaking elite would now need to work on restoring the lost trust, according to Merkel.

"Honesty is part of social market economy," she said, pledging to organize an industry-wide summit in the fall aimed at keeping companies accountable.

No to diesel ban, no to electric quotas

The diesel emissions scandal also fueled the ongoing debate about banning diesel cars in Germany. Several cities across the country are considering such a ban in order to reduce pollution. Despite her criticism of car makers, Merkel rejected a blanket ban on diesel autos, saying that a gasoline-powered vehicle actually emitted more CO2 than a diesel one.

Merkel also rejected a proposal launched by her main rival Martin Schulz, who spoke in favor of introducing EU-wide quotas for electric cars. The chancellor said that the idea was "not really thought through."

"First of all, it would take forever to negotiate the quota on the European level," she said. "And what would we do if it was not adhered to? Would that mean that you are not allowed to buy gas-powered cars?"

Read more: What you need to know about Germany's political parties?

'That's my wife. No, sorry it was Angela Merkel'

Juncker: 'That's my wife. No, sorry it was Angela Merkel'

Instead of assigning quotas, the government should help the companies to "innovate quickly" and transition to electric cars, she said.

"The question is whether the German automobile industry has recognized these signs of the times, and decided their future," Merkel added.

While on the topic of innovation, the chancellor also joked about new technologies assisting unskilled drivers, especially with parking.

"If you are not so good at parking, you can try to do it automatically, even today," she said. "This mostly applies to men."

Polls show strong support for Merkel's CDU and their Bavarian allies, the Christian Social Union (CSU), which together have about 40 percent. The left-leaning Social Democrats (SDP), a partner in the grand coalition, has some support of with 24 percent.