Israel and Germany have restarted bilateral consultations after long-standing disagreements about settlement building. Chancellor Angela Merkel has said she agrees that Israel faces an increased threat from Iran.

German Chancellor Angela Merkel told Israeli Prime Minister Benjamin Netanyahu on Thursday that Germany shared Israel's goal of preventing Iran from acquiring nuclear arms, but said they differed on how that should be achieved.

"Nuclear armament must be prevented, Germany will participate very strongly in it," she said. "What we do not always agree on is the way to achieve this goal."

Merkel was speaking alongside Netanyahu at a press conference in Israel, just a week after he accused European leaders of "coddling Iran's dictators." The meeting represented a renewal of regular government consultations between the two nations after they were paused in 2017 when Merkel expressed her disapproval of Israeli settlement building in the West Bank.

She said the Iranian threat to Israel had increased, as demonstrated by the presence of Iranian troops near the Golan Heights.

"In this respect, we see the pressure and environment under which you live here, and this is very different from the situation in which we may be living in the European Union. I therefore expressly confirm that Israel must, of course, defend itself if it is attacked," she said.

Netanyahu paid tribute to the friendship between the two countries and repeated his opposition to the nuclear agreement with Iran, saying it handed billions of dollars into the hands of the government in Tehran, which promotes Islamist terrorism.

There had been no shortage of controversy ahead of the visit, with Netanyahu widely expected to press Merkel and other EU leaders to follow US President Donald Trump's lead and pull out of the Iran nuclear deal.

Speaking at the United Nations General Assembly last week, Netanyahu claimed the EU had adopted a policy of "appeasement" toward Tehran, a word evoking how European leaders had failed to stand up to Adolf Hitler in the 1930s. He also mentioned the EU's "absolutely crazy" demands of Israel, including the call to stop displacing Palestinians for settlement building.

Ahead of her arrival on Wednesday, children in the West Bank Bedouin village of Khan al-Ahmar put up posters imploring the chancellor to stop the demolition of their homes. Merkel had previously voiced opposition to plans to raze the village. Israel maintains the hamlet was built illegally and dangerously close to a highway.

Merkel told Netanyahu that Germany was still seeking a two-state solution, and that the Israeli settlement policy made that more complicated.

She said she would seek contact with Palestinian President Mahmoud Abbas to discuss the situation in Gaza, and that she would try and get Palestine to join peace negotiations with Israel.

Merkel reaffirmed Germany's responsibility for a secure future for Israel. She admitted that anti-Semitism continued to exist in Germany, and in some cases had worsened.

Merkel visited the Yad Vashem Holocaust Memorial on Thursday, where she signed its guest book. In her entry, she mentioned the "Kristallnacht" (Night of Broken Glass) pogrom, and said that it and the horrors of the Holocaust "gave rise to Germany's everlasting responsibility for this crime and to fight anti-Semitism, xenophobia, hatred and violence."

Merkel was accompanied on the trip by Germany's new commissioner for fighting anti-Semitism, which many fear is on the rise.

In remarks made at sideline events during her visit, the German chancellor drew attention to the lack of women in top-level business and academic positions.

At a meeting with young business representatives, Merkel welcomed the all-male participants while adding that she "wouldn't be disappointed if next time there were more women among the many hopeful future leaders."

"That's not criticism of those sitting here now," she added with a smile, "just encouragement for those yet to come."

Later, Merkel received an honorary doctorate from the Haifa University in recognition of her political leadership and for her service as a role model to women around the world. During a moderated question and answer session after the ceremony, university President Ron Robin stated that "65 percent of the students [at Haifa] are women."

"And what percent of the professors are women?" Merkel asked.

"We have some catching up to do," Robin answered with visible discomfort.

Merkel received a doctorate in physics before turning full time to politics. 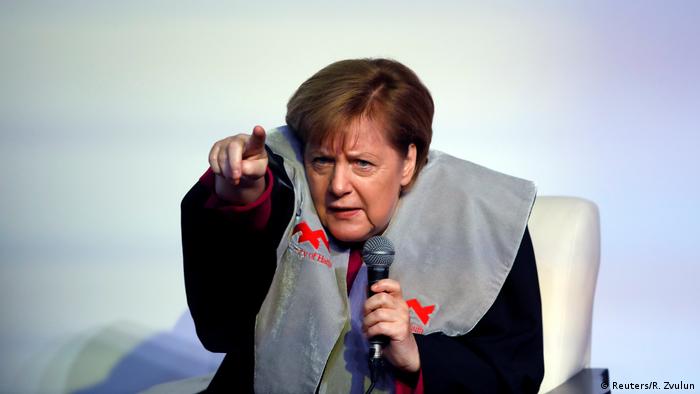 Residents of the Bedouin village of Khan al-Ahmar are constantly living in fear that their village could be razed to the ground by Israeli authorities. Tania Krämer reports on how they're coping with the uncertainty. (03.10.2018)