It is said that Thuringia is the green heart and geographical center of Germany. From here great thinkers like Luther and Goethe moved the world. A federal German state with many sides. 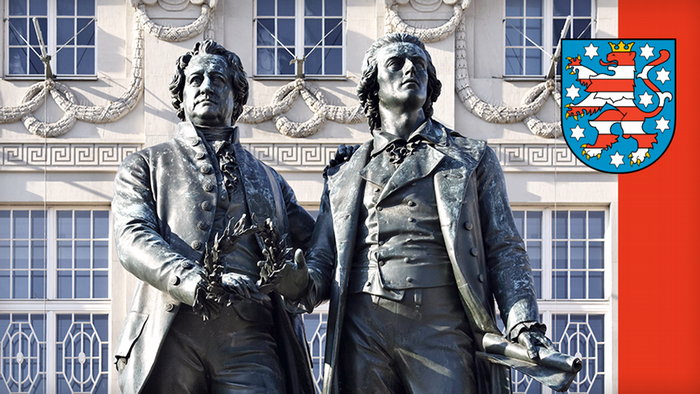 Anyone visiting Thuringia in the middle of Germany will find a wealth of cultural sites of national and international repute. But away from the cities, Thuringia is above all one thing: rich in forests and with the 170 km (106 mi) long Rennsteig route ideal for hiking.

Thuringia's largest city has an impressive old town center around the cathedral. A famous landmark is the 120 meter (393 ft) long Krämerbrücke bridge, on which half-timbered houses with shops and cafes are lined up close to each other.

Cosmopolitanism, universal educational standards, humanistic striving - these were the aspirations of poets Goethe and Schiller. These eminent visionaries lived 250 years ago in Weimar and left their mark on the Thuringian town. The places where they worked here are now UNESCO World Heritage Sites.

Border Stories in Thuringia and Hesse

Germany’s inner border separated Germany and all of Europe  into East and West - as well as Hesse and Thuringia. In 1989 the wall came down in Berlin and the border between East Germany and the Federal Republic was opened. Check-in host Nicole Frölich traveled to places where Germany was once divided, including ones where this is still clear. They include the Point Alpha Memorial, and the Unity Bridge in Vacha. The recording took place before the outbreak of the coronavirus pandemic.

The former military exclusion zone is now the largest continuous mixed leafy forest area in Europe, a primeval forest in the middle of Germany. Hainich National Park is one of the old beech forests that once stretched right across central Europe and is today under UNESCO protection.

The Rennsteig in the Thuringian Forest is the longest high-altitude hiking trail in Germany. Lukas Stege, presenter of the DW travel magazine Check-in, has picked out his three favorite stations along the 170-kilometer route: the summer toboggan run on the Inselsberg, a wildlife observation station in the biosphere reserve and a sustainable tropical house project — and all in the middle of Europe. The recording took place before the outbreak of the coronavirus pandemic.

Hiking along the Rennsteig ridge

Hiking along the Rennsteig ridge

Highlight in a 360-degree video

During a city tour of the Thuringian town of Eisenach, visitors repeatedly come across the traces of Martin Luther. A highlight is a visit to Wartburg Castle, where the reformer had been hiding from 1521onwards. During that time he translated the New Testament of the Bible into German in just eleven weeks.

Use the mouse on your computer or your finger on your smartphone to choose what you want to see. Click on the video and drag the image sections wherever you want.If you have VR glasses, you can watch the video in virtual reality.