Firefighters in the Bavarian capital said one person was seriously injured in an explosion near a construction site by the station. Train service in the city was suspended for several hours. 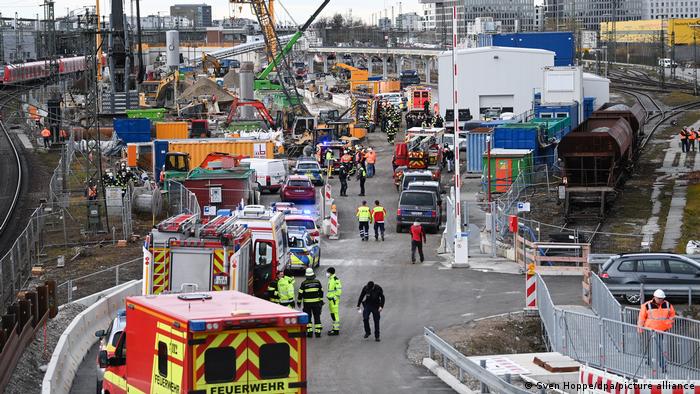 Four people were injured in an explosion near Munich's main train station on Wednesday, the city's fire department said.

The blast, caused by a previously unexploded World War II bomb, prompted officials to halt all train services along one of Europe's busiest rail lines.

The explosion occurred at a construction site near the train station.

The four people who were injured were working at the site, one of whom sustained serious injuries, emergency services said.

The force of the blast almost tore the seriously injured worker's leg off. Doctors operated on him for four hours, reconstructing his leg. His condition was then listed as stable.

A WWII-era aerial bomb was the cause of the blast, Bavarian Interior Minister Joachim Herrmann said during a visit to the site.

Herrmann added that he was shocked when he heard of the incident, initially fearing it was a deliberate attack.

Germany's Deutsche Bahn rail service suspended rail service for several hours as a precaution as the explosion happened near a bridge where all trains in and out of the station must pass. By early afternoon, trains had resumed running.

Officials did not say why the bomb wasn't detected ahead of time. Normally, such construction sites are intensively surveyed to reveal any leftover munitions.

The discovery of bombs left from fighting during World War II is a fairly common occurrence in Germany, although explosions are rare.