The stationing of US troops in Germany serves "European and trans-Atlantic security," the German government says. US President Joe Biden has put plans to deploy them elsewhere on ice. 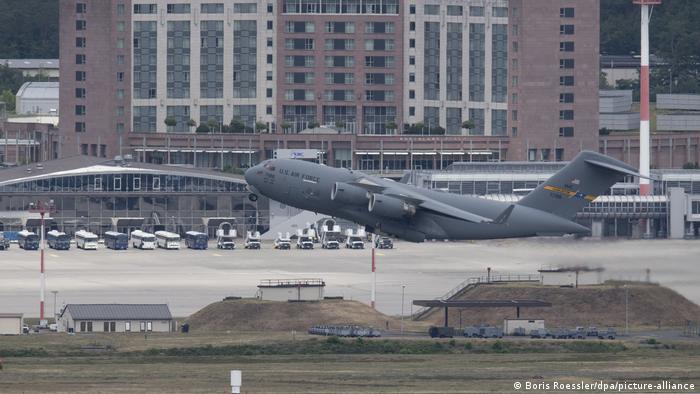 The German government welcomed US President Joe Biden's plan to stop the planned withdrawal of thousands of US troops from German soil, Chancellor Angela Merkel's spokesman said on Friday.

"We have always been convinced that American troops being stationed here in Germany serves European and transatlantic security and hence is in our mutual interest," Steffen Seibert told reporters.

US troops have been stationed in Germany since World War II. Former-President Donald Trump's plan to withdraw almost a third of the soldiers based in Germany were met with heavy criticism.

Biden said on Thursday that the withdrawal would be halted at least until his incoming Defense Secretary Lloyd Austin had completed a review of US military presence around the globe.

Why did Trump plan to remove US troops from Germany?

Germany has long been a key base of operations for the US military. It hosts several military facilities including the Ramstein Air Base and the Landstuhl Regional Medical Center — the largest American hospital outside the US — both in the western state of Rhineland-Palatinate.

Trump's announcement that he would remove 9,500 of the 34,500 troops based in the country met fierce opposition from Congress and the US military top brass.

The former president called Germany, a NATO ally, a "delinquent" for failing to spend 2% of its GDP on defense.

Following the announcement, the Pentagon began a review of how the withdrawal would occur, but no changes or reductions took place before Biden came into office.

What is the Biden administration planning on doing next?

Biden said that Austin's review of troop placement would ensure that "our military footprint is appropriately aligned with our foreign policy and national security priorities.''

"[The review] will inform my advice to the commander-in-chief about how we best allocate military forces in pursuit of national interests,'' Austin said.

"President Biden's call today for American leadership on the world stage, and in particular his belief that diplomacy should be our first tool of choice, is reassuring not only to the men and women of the Department of Defense but to our fellow citizens as well," he added.

Austin had held a phone conversation with his German counterpart, Annegret Kramp-Karrenbauer, the week before when he had hinted at a reconsideration of the withdrawal plan.

The US defense secretary has told his German counterpart that American troops "feel very comfortable" in Germany. In a controversial move, former President Trump ordered US troop numbers to be reduced by more than 25%.

Joe Biden has officially named Lloyd Austin as his pick for defense secretary in his incoming cabinet. If confirmed, Austin would be the first Black leader of the Pentagon.

A Russian invasion of Ukraine would be the "largest since World War II" and prompt "enormous consequences," the US president has said. Officials are in talks about a diversion of gas to Europe if Russia cuts supplies.