The German parliament has revised the Nationality Act to make it tougher on those joining foreign terrorist groups, polygamists and naturalized citizens who committed fraud to gain citizenship. 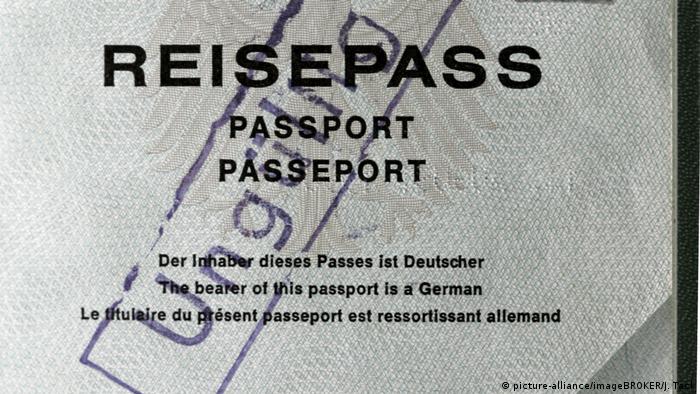 Germans with dual nationality who join foreign terrorist militias can lose their citizenship in the future.

The changes to the citizenship law apply only to adults who have a second nationality and will not be applied retroactively. Minors are unaffected.

The new rule states that those who join foreign terrorist groups "turned their back on Germany and its basic values and turned to another foreign power in the form of a terrorist militia."

Read more: Revoking citizenship: How it works across the EU

The Nationality Act already includes a similar rule for dual nationals who join "the armed forces or a comparable armed unit" of another country without the permission of the German Defense Ministry.

The dual national must not necessarily participate in direct combat in a foreign terrorist organization to be stripped of citizenship.

While intended to strip the citizenship of those who join the "Islamic State," the law is left vague as to what other terrorist organizations it applies to.

Under the bill, a terrorist militia is defined as "a paramilitary organized armed association that aims to violently abolish the structures of a foreign state in violation of international law and replace these structures with a new state or to build state-like structures."

Polygamy is against the law in Germany. The revisions to the Nationality Act will prevent those in polygamous marriages from being naturalized as German citizens.

The law intends to ensure that those naturalized "integrate into the German way of life."

Migrant organizations and some legal scholars took issue with the term "integrate into the German way of life." They are concerned that the wording is vague and amounts to promoting a "Leitkultur" (which translates to "leading" or "guiding culture").

Read more: What is German 'Leitkultur'?

3.  Naturalization can be revoked for a period of 10 years instead of five years if false or incomplete information is provided

According to police estimates, less than a third of asylum-seekers could submit a passport in 2015 during the refugee crisis. Numerous fake passports were also used. Some refugees have also pretended to be Syrians in order to have a better chance of staying in Germany.

Under the change to the law, those proven to have lied or committed fraud to become naturalized can have their citizenship revoked up to 10 years after naturalization. Previously, the deadline was five years.

Germany's cabinet has approved a change to the law allowing dual nationals to lose their citizenship if they fight for a foreign terrorist militia. The new law will not be applied retroactively. (03.04.2019)

Germany is forcing people displaced by the Syrian war to get documents and hand over money at Syrian consulates loyal to Bashar Assad. Refugee advocates say this is inhumane and supports the brutal Assad regime. (18.12.2018)

Rangers at the Kahuzi-Biega National Park in the Democratic Republic of Congo are said to have raped and killed indigenous people with the aim of driving them out. The park is largely funded by Germany.