Germany to reintroduce rabbis into army 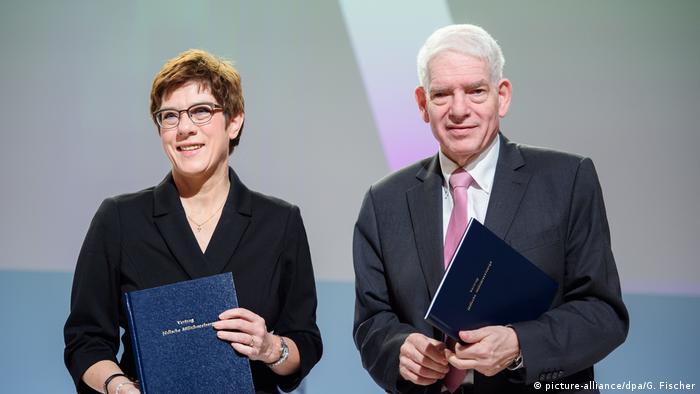 Germany's defense minister on Friday signed an agreement to reintroduce rabbis into the armed forces to look after the spiritual needs of Jewish soldiers, saying it was a "strong sign" of diversity and openness.

Together with the President of the Central Council of Jews in Germany, Josef Schuster, the minister signed the agreement at a Jewish conference in Berlin.

Schuster called the day "historic" for relations between Jews and the German army.

"People who consider themselves to be part of a democratic society should and must take responsibility for it," he said, adding that the introduction of rabbis into the military is "a signal for... the strength of democracy."

The military has not employed rabbis since Hitler came to power in 1933 and expelled all Jewish soldiers from the army.

Kramp-Karrenbauer spoke of the "broken history" between Jews and the military. She said that the step to restore the position of rabbis within the military is a sign of the organization's diversity. Jews have a home within the army just as they do in Germany, she said.

The military rabbis will be headquartered in Berlin. They will serve Jewish soldiers stationed both in Germany and abroad, covering the same duties as Evangelical and Catholic chaplains. Plans to introduce Muslim religious counselors are also in the works.

Parliament is likely to approve the measure early next year.

Among Germany's 180,000 soldiers there are around 90,000 Christians, 3,000 Muslims and 300 Jews. German soldiers can report their religious beliefs on a voluntary basis.