Out-of-date swine flu immunizations that were bought by Germany amid fears of a pandemic two years ago are to be destroyed. The number of people who wanted the vaccine at the time was lower than expected. 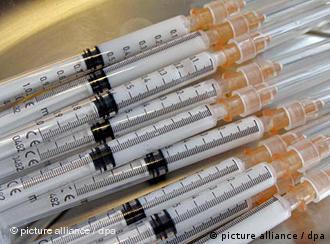 Many were skeptical about the need for a jab

Swine flu vaccine that German states bought amid fears over a pandemic two years ago, but which few people wanted, is to be destroyed.

The news was confirmed by a spokesman for the Health Ministry of the state of Saxony Anhalt on Wednesday, as stocks of the vaccine reach the end of their shelf life.

Officials from Saxony Anhalt, which currently chairs a working group on the issue, are inviting tenders from disposal firms to get rid of as many as 16 million vials of the material.

The vaccine - which is to be burnt at high temperatures - was bought to meet demand across all German states at the time of the swine flu outbreak in 2009, and had been stored centrally. In addition, said the spokesman, many states had bought their own supplies - some of which have already been destroyed. Initially there was widespread concern about the H1N1 virus

In total it is believed that there was an excess of up to 30 million containers of vaccine, costing as much as 250 million euros ($360 million).

States were left with the excess vaccine because fewer people than expected had taken up the opportunity to have the immunization, amid widespread skepticism about the true threat posed by the flu.

Swine flu became a concern across the world in 2001, after it appeared to have originated in Mexico.

The outbreak was declared a pandemic in June that year. The classification came to an end in August last year as the threat posed was considered to have diminished.

The World Health Organization had come in for harsh criticism at the Council of Europe in Strasbourg early last year for its handling of the H1N1 flu pandemic.

Accusations were made that the organization had exaggerated claims of the risk in order to benefit drug companies keen to sell the vaccine.

A three-year-old girl and a 51-year-old man have died of influenza infection in Goettingen. In both cases, the swine flu virus H1N1 was confirmed. But health officials said on Monday that there was "no need to panic." (03.01.2011)

WHO denies hyping swine flu for benefit of drug companies

The World Health Organization is defending its decision to declare an H1N1 flu pandemic last year as the Council of Europe investigates claims the organization was influenced by experts with ties to the vaccine industry. (27.01.2010)

The German states came to an agreement with swine flu vaccine manufacturer GlaxoSmithKline (GSK) on Thursday to cancel their orders, after public demand failed to materialize. (07.01.2010)