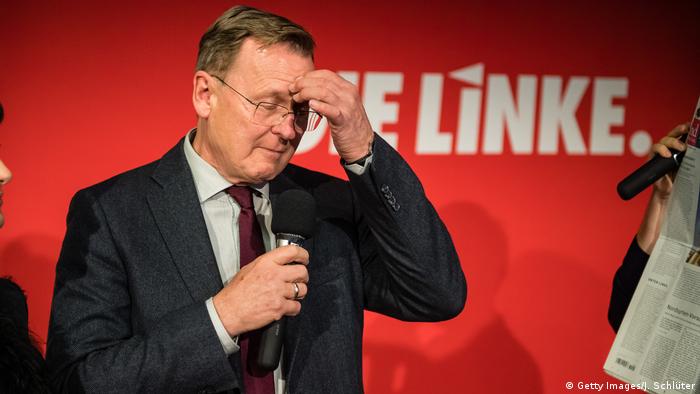 A high-level meeting will take place in Thuringia on Monday where ex-premier Bodo Ramelow and his allies will offer a compromise to lawmakers from the conservative Christian Democrats (CDU), in a bid to end the deep political crisis in the eastern German state.

Ramelow, from the socialist Left party, said he was ready to reach a deal with the CDU on next year's state budget and an investment program for state municipalities.

But the talks would not focus on "who leaves the scene as a winner and who leaves it as a loser," the ex-premier told the DPA news agency on Sunday.

The popular Left party politician had ruled the state since late 2014, but last October's election saw his coalition allies, the Greens and the SPD, win fewer seats and leave his party without a majority.

Earlier this month, he was officially replaced by Thomas Kemmerich, who was voted in by the CDU, his own business-friendly FDP party, and — unexpectedly — the far-right Alternative for Germany (AfD).

Until that moment, all other German political parties had ruled out cooperation with the AfD at any level of government, and the outcome caused nationwide outrage. Chancellor Angela Merkel called it "unacceptable" and Kemmerich was forced to resign a day later without naming his cabinet. However, he remains the caretaker premier.

In the immediate wake of the fiasco, CDU party leader and handpicked Merkel "heir" Annegret Kramp-Karrenbauer resigned her leadership post and said she would not be a candidate for the chancellorship in next federal elections, set for late 2021.

Ramelow now said he would meet with CDU representatives to discuss a fresh election.

"I want us to establish enough trust to make sure this one-person government does not take another half a year," he was quoted as saying by DPA.

Ramelow's left-wing coalition needs votes from either from CDU or the FDP to oust Kemmerich. However, the CDU also has a policy of not cooperating with his socialist party.

During the weekend, the representatives of the leftist Green party in Thuringia urged that there be no prepared demands for the meeting with the CDU.

The left-wing coalition should meet their rivals with "an appropriate amount of humility," the leader of Green lawmakers in the state parliament, Dirk Adams, told the regional daily Thüringische Landeszeitung.

Separately, the CDU representative rejected "active support" for Ramelow in case of a new vote in the parliament, but did not rule out the possibility of his party abstaining in the vote.

The AfD has threatened a tactical move of supporting Ramelow in a future vote, and so force him to step down, as he is expected to reject a new term if it were given to him by the populist party.

On Saturday, thousands of people took to the streets of the German cities of of Dresden and Erfurt to demonstrate against political deals with the AfD.