A large demonstration against woodland clearance went ahead in Germany's Hambach Forest after a ban was lifted. Organizers say that more is at stake than just conserving a nature area. 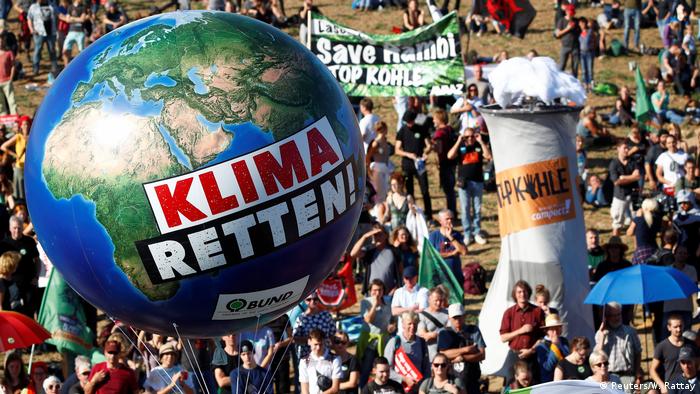 Some 50,000 people gathered in the Hambach Forest near the western German city of Aachen on Saturday to call for the woodland's preservation and for lignite to be finally abandoned as a source of energy in the country.

The peaceful protest took place a day after a court in Aachen revoked a ban on the demonstration imposed by police over security concerns.

But the hundreds of police who were on duty since the early morning hours had little to do, the demonstration was entirely peaceful, and attendees spoke of a "festival" or picnic atmosphere.

Participants in the long-running demonstrations against the plans to raze the forest to build a coal mine had their spirits lifted after a court ordered that the clearance of the forest be suspended. The suspension remains in place while a lawsuit calling for the area to be conserved as a special bat habitat is being decided. 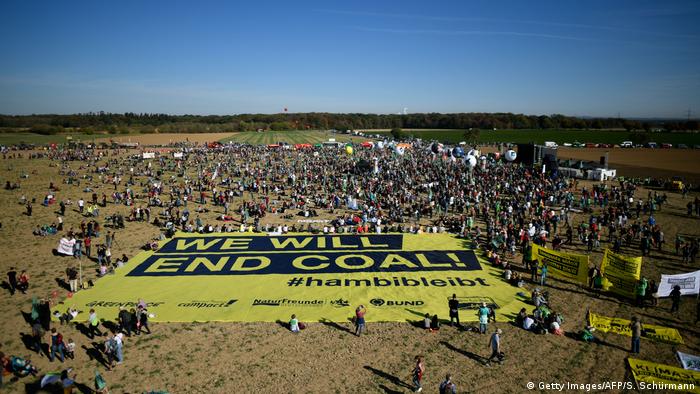 'We will end coal!' reads one giant banner

"There is a cheerful atmosphere because of the clearance ban by the Higher Administrative Court in Münster," said a spokeswoman for the environmental group BUND, which is behind the lawsuit.

Some 20,000 people were expected to join the demonstration during the day but organizers said they thought 50,000 had turned up by Saturday afternoon.

Energy firm RWE had originally planned to begin clearing half of the remaining forest standing near an already existing open-pit lignite mine by mid-October.

According to the company, they were forced to stop over "safety concerns" after 100 activists occupied the area.

Opponents of the clearance plans say that any destruction of the remaining forest is unnecessary in view of the fact that Germany has pledged to move away from climate-unfriendly fossil fuels within the next few years. They had called for a suspension of clearance operations at least while the so-called coal commission, which is currently discussing an exit strategy from the use of coal, comes up with its findings.

Michael Müller, the chairman of NaturFreunde Deutschland, one of the environmental groups behind Saturday's protest, told the DPA news agency that the demonstration was about much more than just protecting the wood.

"It is about the issue of whether we can prevent the ecological self-destruction of humanity or not. We don't just want an exit from coal, but also from oil and gas," he said, adding that people should not say in a few decades that "we knew that humans were causing climate change but we didn't act."

Read more:The origins of the Germans' special relation to the forest

A German energy giant's plan to clear ancient woodland, long occupied by environmentalists, so it can mine lignite has been halted temporarily. Meanwhile, a ban on an anti-coal protest near the site has been lifted. (05.10.2018)