It's all over: Stockholm has the best tram drivers in Europe. That was the result of this year's electrifying and surprisingly close European TramDriver Championship in southern Germany. 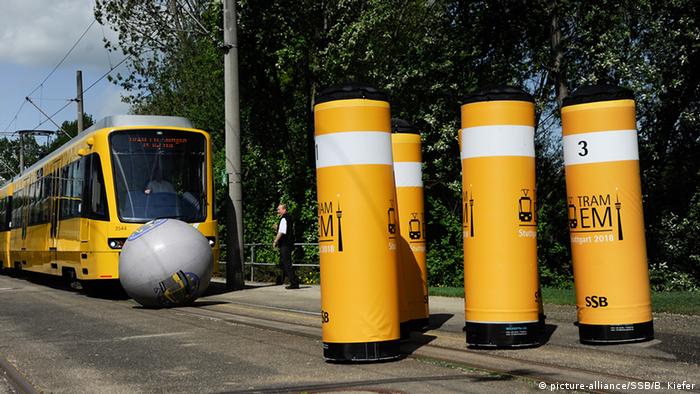 Tram drivers from the Swedish capital, Stockholm, crowned themselves champions of Europe on Saturday after narrowly beating Frankfurt's team at this year's European TramDriver Championship in the southern German city of Stuttgart.

Sara Aspenstrom and Jonas Arvidsson roared to victory after accumulating the most points from six disciplines that tested their spatial awareness, braking skills and ability to judge distances. In one event, drivers were tasked with trying to knock down six large bowling pins by skillfully ramming a large ball in their direction.

Andrea Ramsthaler and Jens Buchhold from the western German city of Frankfurt took the second spot with only 40 points less than the duo from Stockholm.

It turned out to be a bitter day for the Norwegian city of Bergen, whose team came in third after leading at the half-way point.

In total, 24 teams consisting of two drivers each from 19 countries tested their mettle at this year's TramDriver Championship, considered Europe's most esteemed tram driver competition.

Read more: German high-speed train grinds to a halt for a sounder of swine

The first TramDriver Championship took place in 2013, and host cities have included Vienna, Berlin and the Spanish island of Tenerife.

Organizers selected Stuttgart as the 2018 host to mark the 150th anniversary of the city's tram network.

History appeared to weigh heavily on the duo from Stuttgart, which took the 21st spot. Citing the disappointing result, a spokesman for the Stuttgart tram network said the team had "elegantly restrained" themselves.