Germany Still Divided over the Idea of Baby Hatches | News and current affairs from Germany and around the world | DW | 21.12.2002

Germany Still Divided over the Idea of Baby Hatches

A plan to help mothers who can’t provide for their babies remains controversial 3 years after it was started. Advocates of “baby hatches” say they save unwanted children, critics say they encourage infant “disposal”. 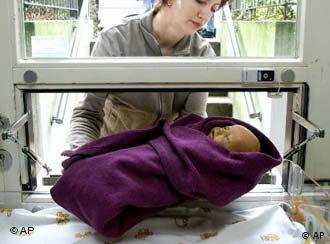 Your baby will be cared for here

Those were the words posted in public places in the northern city of Hamburg in 1999, when Germany’s first “baby hatches” appeared here. The hatches, fitted into hospital walls, allowed mothers unable, or unwilling, to care for their infants a way to abandon them, without endangering the baby’s health.

The idea is not new. Convents throughout Europe in the middle ages accepted abandoned babies left by unknown mothers. As the 20th century came to a close, the idea returned in updated form. The baby boxes were seen as an almost desperate measure to counter the increasing instances of infants being abandoned in public toilets or garbage dumps, many of them dead from exposure.

“We set up this system up because we were aware that young children were occasionally being abandoned,” said Siegbert Heck, head of pediatrics at the Waldfriede Hospital in Berlin.

"It happens between 40 and 50 times a year in Germany. Half of those babies have died by the time they are discovered. We don’t want it to come to that.”

The city of Berlin set up its own baby hatches in 2000, and in the past two years hospitals here have had eleven children left in them. Behind the hatch itself, a small bed and blanket await the newborn child.

There is a letter in German, Polish, Turkish and Russian explaining the procedure to the mother and a means of recognizing the child that woman can use later to get news on or reclaim her baby. One minute after the hatch is activated, a signal goes off alerting staff or volunteers who come and care for the child.

“It’s always a strange feeling you get in your stomach, when you still don’t know what condition the child will be in,” said Vera Kromrei, a pediatric nurse at Waldfriede. “If it turns out to be healthy, we’re happy. We give the children a lot of love and care, and we’re glad we can look after them.”

If the mother does not return for eight weeks, the child is put up for adoption.

Proponents say the 70 baby hatches around Germany today save the lives of children who could likely die otherwise. It gives mothers overwhelmed by their circumstances a way out, without endangering the infant. If the child is sick or malnourished, it can be given immediate treatment.

But the hatches have remained controversial since their inception and they have their detractors. Experts say that since the hatches have been introduced, the number of abandoned infants has not actually gone down. Opponents say that shows that the really desperate mothers are not being reached.

“I have the suspicion that the existing baby hatches induce people to simply “dispose” of their child in the hatch, rather than taking the rockier road involved in finding another way to solve the problem,” said Sabine Walther of the German Society for the Protection of Children, a group which opposes the baby hatch idea and tries to encourage adoption as an alternative.

Critics, including some high-profile ones like Angela Merkel, head of the conservative Christian Democratic Party, say the hatches allow women to give birth anonymously, which is technically illegal in Germany but tolerated. Normally doctors or midwives are required to register the names of women giving birth. Anonymous births make it impossible for children to search for their mothers or fathers later, opponents say, leaving the children rootless for the rest of their lives.

“According to the law, you cannot preserve anonymity, but in fact, when a foundling is discovered or handed over, you have to inform the police and take the proper measures,” said Ulrike Herpich-Behrens of Berlin’s Juvenile Affairs Division.

But that does not reflect today’s reality, according to baby hatch proponents. They admit the idea is far from ideal, but say it is better for the child to end up in alive in a hospital than dead in a garbage dumpster.

“Our deepest wish, naturally, is that the mothers seek out our help and then come back to look for their children,” said Ursula Kuenning, a coordinator at Berlin’s baby hatch program.

That wish is rarely fulfilled. Of the four Berlin cases in 2001, no mother returned for her child.