Germany has temporarily closed its embassy in Ankara, reportedly because of fears of an attack. Turks are said to be outraged by a German magazine's depiction of President Recep Tayyip Erdogan as a dictator. 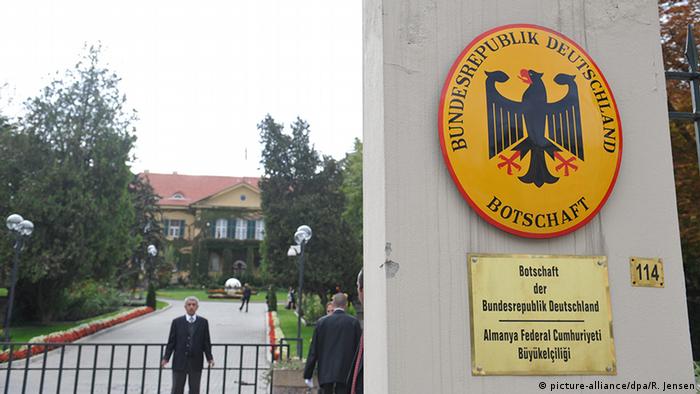 Germany closed its embassy and all other consular offices in Turkey on Wednesday, with reports that officials feared the buildings might come under attack.

The Foreign Ministry confirmed that its embassy and consular offices, including the main consulate in Istanbul, would be closed from September 12 to September 16. However, the ministry did not comment on the reason.

Germany's "Bild" newspaper reported that the decision had been taken as a precaution after the German Foreign Ministry learned that mob attacks were likely during the Eid al-Adha religious holiday. Public outrage in Turkey was said to be brewing over the depiction of President Recep Tayyip Erdogan in the latest edition of German news magazine "Der Spiegel."

The Turkish government accused the weekly of giving a distorted view of the country in its "Focus on Turkey" special edition. Ankara accused Der Spiegel of prejudice and said the front page was "particularly provocative."

In a statement, Turkish Foreign Ministry spokesman Tanju Bilgic said the cover, published during Eid, sought to create "a negative image not only about Turkey but also Islam."

The front page features a stone-faced Erdogan wearing sunglasses as the minarets from Istanbul's Blue Mosque appear to have been transformed into military rockets lifting off into the air. Under the main title "Hotspot Turkey," is the strapline, "A country loses its freedom."

At the bottom of the page, a teaser for one of the magazine's stories is titled simply "The Dictator."

The Turkish Foreign Ministry described the magazine's publishing policy as "far from being responsible," saying that it was "the clear and latest example of an anti-Turkey approach."

"We regretfully condemn the attempts... to smear Mr. President," it added, urging an end to efforts to tarnish Turkey's image.

Turkish and German relations have been tested lately, with Turkey having barred German parliamentarians from visiting the Incirlik airbase over a Bundestag resolution that declared the massacre of Armenians during World War I to have been "genocide." The ban was later lifted after the German government pointed out that the resolution was not legally binding.

The German government also complained last week about the confiscation of DW's interview footage with Turkish Minister of Youth and Sports, Akif Cagatay Kilic. The minister had been asked about the July coup attempt in Turkey, which was followed by a harsh crackdown on opponents of Erdogan.

An adviser to President Zelenskyy says the US secretaries of state and defense are holding talks with the Ukrainian leader. Meanwhile, Kyiv blames Russia for Mariupol evacuation failure.