The number of employees in Germany who were written off sick rose by 60 percent in recent years — especially those with mental health complaints. Despite this, the German government has said there's no reason to panic. 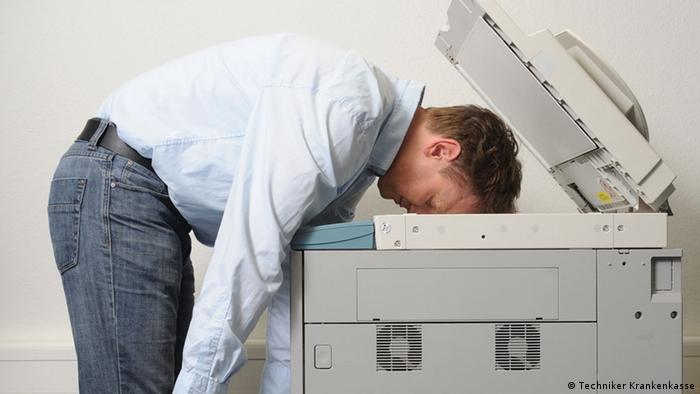 Private companies and public authorities logged almost 560 million sick days in 2016, according to data provided by the German government in response to an inquiry by the Left party.

The number of sick days taken by workers in Germany rose by 60 percent between 2008 and 2016, reported German newspaper Rheinische Post on Friday, citing the government figures.

The missed days dealt a blow to the economy, with the government estimating the resulting economic damage amounted to €75 billion in 2016.

The report noted that the government's economic loss estimate didn't take price development into account. Still, even after the figure was adjusted for inflation, the Ministry of Health said there had been a 30 percent increase in economic losses over the past 20 years due to rising sick leave.

The data showed that stress, time pressure and shift work are among the factors in the workplace that also take their toll on employees' mental health.

Between 2008 and 2016, the number of sick leave cases related to psychological issues "exploded" by 125 percent, according to the Rheinische Post.

However, the most common reason why people were written off sick in recent years was due to back pain and other muscular-skeletal problems. The data also showed a 60 percent increase in sick days related to such cases.

Women more often called in sick than men, the data showed. According to Rheinische Post, women also called in sick to take care for their children — which likely points to an imbalance in child care expectations that impacts working mothers more than working dads.

Although the figures appear to point to unhealthy trends in the workplace, the German government believes otherwise. In their response, officials noted that mental health issues are more often diagnosed than in previous years as society has grown to accept and discuss mental health conditions.

They also noted that the rise in sick days is also due to there being more people in the German workforce than in previous years and because the workforce is getting older.

"More people than ever before are working in Germany, so naturally the number of sick days goes up. Older employees, in particular, are out from work statistically longer," a spokesman for the Confederation of German Employers' Associations (BDA) told Rheinische Post.

Some politicians aren't buying the government's reasoning, saying that the data indicates glaring problems in labor practices in Germany.

Such working conditions deliver record profits, but lead to employees burning out physically and mentally," she added.

How sick leave works in Germany

Unlike in some other countries, most workers in Germany do not have a set number of sick days per year that they are allowed to use.

In Germany, a doctor's note is only required if an illness forces a person to miss more than three consecutive days of work.

Employers are also legally required to pay 100 percent of their employees' wages for the first six weeks.