German police have closed a river to traffic after a Dutch ship sank and began to leak a dangerous fluid into the water. The authorities were trying to prevent it from spreading downstream. 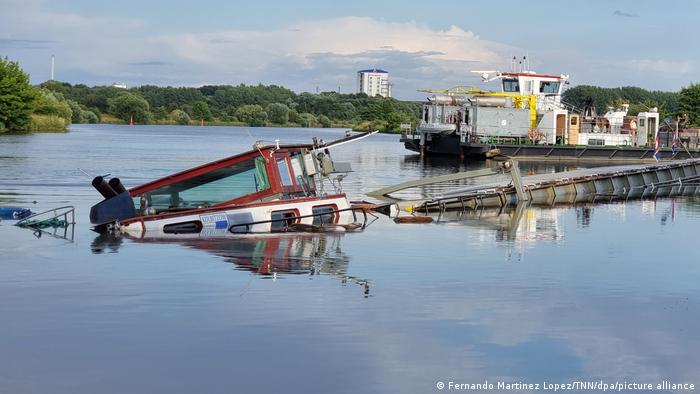 Two river container ships collided on Sunday while traveling along the Weser river in northern Germany, the German waterways police said. The incident has likely caused "enormous damage," according to the police.

A 67-meter-long (220 feet) Dutch vessel went down after hitting a ship from Poland. The Dutch ship had been carrying over 1,000 tons of maize, the public broadcaster Norddeutscher Rundfunk reported.

The incident took place in the northern state of Lower Saxony. According to initial reports, there were no injuries and the cause behind it was unknown.

The crew had been rescued by the fire services, police from the town of Nienburg said on Twitter, adding that the waterway had been closed. They warned that dangerous fluid was still leaking from the sunken ship.

The second vessel was also damaged in the collision.

Divers try to salvage the ship

The police did not say how long the closure of the river would last. Emergency responders set up oil booms to prevent the leaking substance from spreading down the river.

The river is three to four meters deep at the site of the incident.

Divers began work to see if they could salvage the ship and remove its cargo. Officials said they would begin a proper investigation on Monday.

Emergency workers from the Federal Agency for Technical Relief (THW) secured the vessel to prevent it from drifting off.