Germany Questions Legality of Iraq War | Germany | News and in-depth reporting from Berlin and beyond | DW | 04.11.2003

German Defense Minister Peter Struck re-ignited the transatlantic spat over the Iraq war by questioning the legality of the U.S.-led invasion. He said American unilateralism endangered NATO’s principle of consensus. 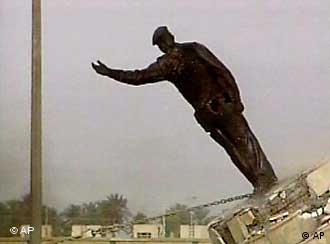 The U.S. toppled Saddam Hussein, but was it a legal military action?

For a while it looked like the United States and Germany had pushed their differences over the Iraq war behind them and were on a course to repair damaged ties. Germany voted in favor of the most recent United Nations resolution on Iraq, put forth by the Washington administration, and Chancellor Gerhard Schröder shook hands with President George Bush while offering tentative technical support in rebuilding the war-torn country.

But on Monday evening in Berlin, the mending started to unravel again as German Defense Minister Peter Struck lashed out at the United States for ignoring the international community and criticized the Bush administration for endangering NATO’s principle of consensus decision-making.

Speaking at an international security conference just a stone’s throw away from a press conference for outgoing NATO Secretary General George Robertson, who was in Berlin as part of a farewell trip to member states, Struck said that forming so-called "coalitions of the willing," such as the one created by Washington ahead of the invasion of Iraq, jeopardized NATO solidarity. In an unexpected swipe at the leading NATO country, Struck said it would be more politically astute for the United States to act multilaterally and in tune with other NATO partners. 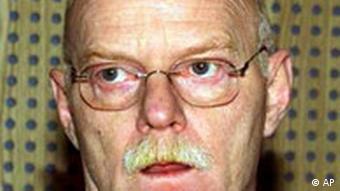 Ad hoc relationships, he said, could not replace the long-standing alliance, but they would reduce NATO to the role of a military "toolbox" for the United States to use at its whim. The German defense minister stressed that the alliance’s principle of consensus was not simply a nuisance that could be overlooked whenever one of the members felt inclined to go their own way.

"NATO must not be seen as a servant implementing the decisions made in Washington," Struck went on to say. "Anybody who wants a strong NATO must prevent this from happening."

"Preventive (military) action requires unambiguous intelligence," he said. "The weapons of mass destruction which cannot be found in Iraq have shown how thin the ice can be when one embarks on a war of self-defense on the basis of supposedly clear proof of an imminent threat."

Therefore, Struck said he saw reason enough to question the legality of the war, which Washington and London justified by arguing that Saddam Hussein’s alleged weapons of mass destruction posed a threat to peace in the region and world. "One can ask the question whether what the United States did in Iraq was legitimate under international law," he said.

In general, Struck was critical of NATO jumping too quickly to military action as a solution to world conflicts. "Military power has its limits," he cautioned. "It alone does not enable successful ‘nation building’ or lasting stability of the kind that is needed in the Balkans, in Afghanistan or in Iraq," the minister said referring to regions where military presence is still vital to maintaining peace.

For this reason, Struck stressed that NATO partners, Europe and the United States must work closer together and in consensus to bring stability to the "Greater Middle East," including Iraq.

In his first speech to parliament after returning from New York, Chancellor Schröder says Germany and the United States are back on track and looking to the future of Iraq (Sept. 26, 2003).