Demonstrators have taken to the streets in the German state of North Rhine-Westphalia as the state government prepares a new assembly law. Critics say the law would make state surveillance easier. 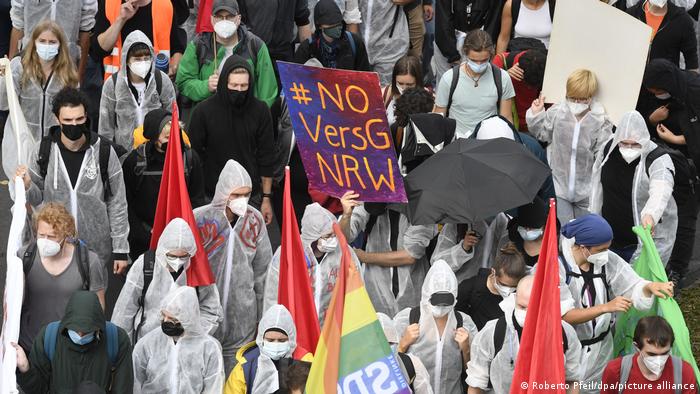 A march against a planned laws regulating public protests ended peacefully, according to police in the German city of Düsseldorf on Saturday.   Organizers of  the protest said up to 5,000 participants had taken part. The police, however, put the number at 1,800 people.

The state government of North Rhine-Westphalia — Germany's most populous state — is planning an assembly law that opponents say limits their freedom to protest.

Activists say the law will undermine basic rights such as freedom of expression of opinion and freedom of assembly.

Banners at the event read "Stop police arbitrariness," "Protect the fundamental right to demonstrate," and "Repel attacks on freedom of assembly."

At an earlier demonstration in June, clashes turned violent with both police officers and demonstrators injured.

Why is the law controversial?

The state government says the legislation is necessary to prevent demonstrations turning violent and causing obstructions.

Assemblies must be registered at least 48 hours ahead of time, and police are to be informed of the number of stewards.

Should police decide that public safety is at risk, the stewards must be named, along with their addresses.

It would also be easier to carry out video surveillance and the police would be allowed to use drones to film gatherings.

Police could set up "checkpoints" to take personal details and threats of punishment and fines are being drastically increased, in some cases up to two years in prison.

Under the term "militancy ban," wearing "uniform-like clothing" at gatherings would be more strictly prohibited.