As many as 8,000 people gathered on Saturday against plans to tighten rules on protesting in the western German state of North Rhine-Westphalia. According to organizers, the police response was "disproportionate." 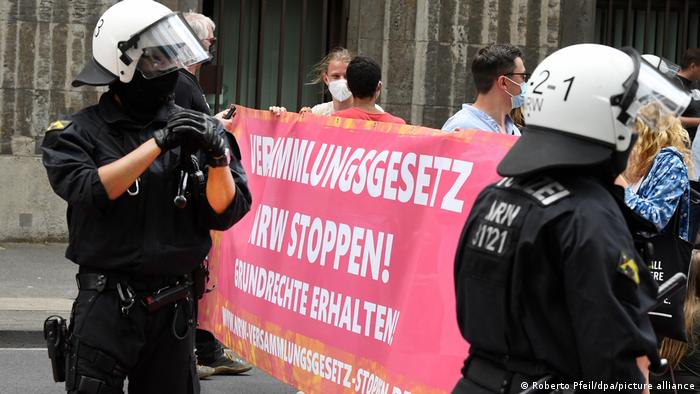 Police in western Germany "violently dispersed" a large protest against plans to tighten rules on demonstrations, organizers complained on Sunday.

The AFP news agency reported that some 8,000 people gathered a day earlier in Dusseldorf, the capital of the western state of North Rhine-Westphalia (NRW), which has proposed the new assembly law.

What have the organizers alleged?

"Stop the Assembly Law NRW - Preserve Basic Rights," an alliance of mainly left-wing organizations, said in a statement that officers surrounded the protesters in downtown Dusseldorf. They were left for several hours without access to refreshments or toilets.

Organizers claimed the protesters were held under the pretext of using banners that were higher than was allowed during demonstrations.

They labeled the police response an abuse of power and said 100 participants had been hurt as a result of "disproportionate police violence" during a "calm, colorful demonstration."

Local media reported that some protesters attacked officers, who resorted to using batons and pepper spray to quell the violence.

The German news agency DPA said one of its photojournalists was attacked by police.

The journalist said he had been beaten several times with a baton by an officer. At least one other colleague was hurt.

DPA's Editor-in-Chief Sven Gösmann said it was an "unacceptable attack on the freedom of press," and demanded a full investigation.

The chairman of the center-left Social Democratic Party in NRW, Thomas Kutschaty, called for a "complete clarification."

How have the police responded?

Police took several hours to respond to reports about the attack on the journalist, local media reported.

Officials said later that the reporter had gotten "between the emergency services and an aggressive group of troublemakers."

A police spokeswoman said a complaint of suspected bodily harm had been filed against the officer who allegedly harmed the journalist.

Giving a further update on Sunday, police said that fireworks and smoke bombs were used by demonstrators.

A police statement said a subgroup of 300 protesters was surrounded as they were "permanently uncooperative and repeatedly committed crimes."

Measures were then taken to establish their identities and several people have been charged.

What about the proposed law?

Although Germany has a federal assembly law, states are allowed to enact their own laws if they wish.

Critics, however, see it as encroaching on the basic right to assembly.

Germany: Outrage over video of officer placing a knee on man's neck

A police officer in the city of Dusseldorf was caught on video restraining a young man by placing his knee on his neck. Authorities are looking into the incident, which has been likened to that of George Floyd.

Germany from A to Z: Dusseldorf

We are taking a tour through Germany and every week we will introduce you to a town in the alphabet. This time D takes us to Dusseldorf - the capital of North-Rhine Westphalia.

An exhibition at Dusseldorf's Kunstpalast features multimedia works reflecting on social expressions of anger and rage amid current political challenges.